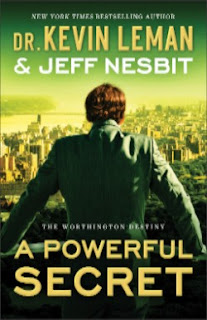 Sean has always felt like an outsider in his own family.
Now he must risk never achieving what he wants most--his father's love.

Billionaire globe-trotter Sean Worthington is stunned when his older brother suddenly abandons the Senate race in New York and walks away without a backward glance. As campaign manager, Sean's left to handle the media feeding frenzy with no answers. Worse, their father--as usual--backs Will, the "perfect" son.

Frustrated by his father's lack of belief in him, Sean determines to finally move on and forge a unique path. But when a powerful secret is revealed, threatening everything Sean has counted on, he must wrestle with shocking truths . . . and combat the power brokers behind the scenes who have the Worthington family in their crosshairs.

Dr. Kevin Leman, the New York Times bestselling author of more than 50 books, including The Birth Order Book and Born to Win, has made thousands of house calls for Fox & Friends, The View, Today, Morning in America, CBS's The Early Show, The 700 Club, CNN, and Good Morning America.

Jeff Nesbit, a former senior communications official at the White House and former director of public affairs for two prominent federal science agencies, is a strategic communications advisor and the author of 25 novels. The executive director of Climate Nexus, he also writes At the Edge, a weekly column for U.S. News & World Report.

Jeff Nesbit is a former communications director to the vice president at the White House, served as the director of public affairs for two prominent federal science agencies, and has been a national journalist with Knight Ridder Newspapers. He is the...

Continue reading about Jeff Nesbit
My review;
"A Powerful Secret"by authors Dr. Kevin Leman and Jeff Nesbit have written a really great mystery, suspense novel. Sean Worthington is a billionaire who loves to travel the world. His older brother is running for the Senate in New York. Without any warning he quits the race and leaves him to answer questions because he is his campaign manager. Even after all of this, his father still thinks that his older brother, Will can do no wrong. Sean decides to get away from them once and for all. Even as he tries to get on with his own life he learns of a secret that can change his whole family forever. Will he be able to help his family or will he loose them once and for all? This is a story that will keep you glued to the pages until you finish it. I give this book a 5/5. I was given this book by Revell Publishing Company and all opinions are mine.
Posted by 3 Partners in Shopping at 11:49 PM