BlurbSpinster Miss Eleanor Lockhart is suddenly homeless and employment is her only option. Ruined after succumbing to a scoundrel’s excessive charm nearly a decade ago, she’s lucky to obtain a position as a paid companion and committed to behaving with the utmost propriety. She definitely shouldn’t be in the arms of a man capable of utterly destroying what little remains of her reputation...


Titus St. John, Duke of Kendal, is known as the Forbidden Duke, a mysterious, intimidating figure who enters Society just once each year at his stepmother’s ball. A decade ago, he was a devil-may-care rake until his idle roguery brought about the ruin of Eleanor Lockhart—and his resulting self-imposed isolation. Now she’s back, and she needs his help. But by “saving” her, he may just ruin her life all over again.

Darcy Burke is the USA Today bestselling author of hot, action-packed historical and sexy, emotional contemporary romance. Darcy wrote her first book at age 11, a happily-ever-after about a swan addicted to magic and the female swan who loved him, with exceedingly poor illustrations.


A native Oregonian, Darcy lives on the edge of wine country with her guitar-strumming husband, their two hilarious kids-who each seem to have inherited the writing gene in some form-and two Bengal cats. In her "spare" time Darcy is a serial volunteer enrolled in a 12-step program where one learns to say "no," but she keeps having to start over. Her happy places are Disneyland and Labor Day weekend at the Gorge. 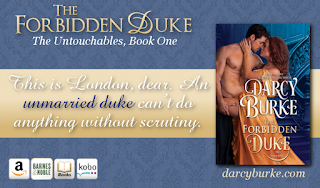 The library was not a small chamber, however it seemed somehow smaller tonight. Kendal’s presence seemed to invade every nook and inhabit every cranny, and Nora was nearly overcome with awareness. And nervousness.


She rushed to say something to put herself at ease. “I quite enjoy the Satterfields’ library.”


He paused, pivoting toward the bookcases that marched along one wall. “Do you? What are your favorites?”


Nora wondered what he’d think of her tastes, which ran the gamut from romantic novels to gothic tales to poetry to suspenseful narratives. “I have many. I’m afraid it’s difficult to choose.”


“What’s the last one you read then?”


She hesitated, but only briefly. “A romantic novel by Sarah Wilkinson.” Presumably, he’d find her tastes lacking.


Nora looked up at him in surprise. “You read Sara Wilkinson?”


He gave her a sly look. “Perhaps you noticed that Lady Satterfield owns every title. She’s always had a penchant for such stories, and, in my youth, I read everything I could get my hands on. Everything.”


Nora pressed her fingers to her mouth and giggled. “Do you like romantic novels?”


“I don’t dislike them. If I’m in a particular mood, I’ve been known to read three or four in a week.”


Her giggles turned to outright laughter. “The Forbidden Duke reads tawdry romances? What would the ton say?”


“I don’t give a damn what anyone says, but I suppose that would cause a stir.”


How lovely it must be not to care—not to have to care—what others said about you. “Everything you do causes a stir,” she said, her laughter dying down. “The novels would make you seem more human, however.” She inwardly winced at how awful that sounded. “Oh dear, please forgive me. I didn’t mean to infer you aren’t human.”


He took her hand and tucked her fingers beneath his coat, guiding her palm flat against his waistcoat directly over his heart. “You can feel that I am.”


Nora’s breath caught. She looked up at him, her gaze locking with his. “I never doubted it.”