Petyr has never found it necessary to consider the humans as anything more than distant, inferior beings–until now. They are the cause of the fatal disease that has plagued his realm, taking the lives of too many of his kind.

As a future leader of a realm in peril, Petyr must find a way to resist and cure the affliction. He must enter the unfamiliar realm, appear to be an ordinary eighteen-year-old human, observe and learn.

However, things don't exactly go according to plan. Instead of embarking single-mindedly on his sober mission, Petyr meets an 18-year-old girl who does things to his emotions that he can't quite fathom or control. Petyr is falling in love, and he almost forgets the gravity his choices have on his entire world. Despite the risk it poses to his life and hers, he wants to know her, and he wants her to know him–and his world.

Available at Amazon UK    Amazon US 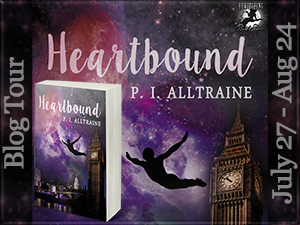 P.I. Alltraine is an award winning poet and author. She has won several international poetry competitions, and her poems have been published in separate anthologies.

Before moving to London, she lived in the Philippines where she was ensconced in the rich culture encrusted with dark myths and enchanted tales. She draws inspiration from these in her writing. Although she has lived indifferent places and experienced different cultures, she always enjoyed the constancy of writing in her life. Her favourite authors include John Milton, Virginia Woolf and James Joyce.

P.I. Alltraine is running a raffle for anyone who purchases Heartbound between the 5th and 15th August - details on how to enter available here https://www.facebook.com/p.i.alltraine/posts/496922083796707