Descendants of the Rose by Juliette Harper Blog Tour and Giveaway

Welcome to my tour stop for Descendants of the Rose by Juliette Harper! This is the first book in the Selby Jensen Paranormal Mysteries series and the tour runs July 20-31. Check out the tour page for more information.

Selby Jensen’s business card reads “Private Investigator,” but to say the least, that downplays her real occupation. Let’s hear it in her own words:


“You want to know what I do for a living? I rip souls out. Cut heads off. Put silver bullets where silver bullets need putting. You think there aren’t any monsters? . . . I have some disturbing news for you. You might want to sit down. Monsters walk among us. I’m looking for one in particular. In the meantime? I’m keeping the rest of them from eating people like you.”


In this debut novel of her new paranormal mystery series, Juliette Harper, author of The Lockwood Legacy books and The Study Club Mysteries creates a cast of characters, most of whom have one thing in common; they don’t have a pulse. The dead are doing just fine by Selby, who is determined never to lose someone she loves again, but then a force of love more powerful than her grief changes that plan.


Join Selby Jensen as she and her team track down a shadowy figure tied to a murder at a girls’ school. What none of them realize, however, is that in solving this case, they will enter a longer battle against a larger evil. 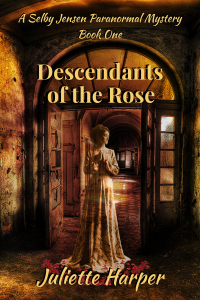 Excerpt;
“Helen, for God’s sake, would you just stop hovering?”

Helen’s been my best friend since preschool, and getting killed in a car crash the summer we turned 25 hasn’t slowed her down a damned bit.

When I say Helen hovers, I mean she actually hovers. She’s a ghost. Scared the holy living crap out of me when she showed up beside me in an emergency room cubicle 30 minutes after she died in my arms. I remember exactly what she said, “Jesus, Jensen, you thought you were getting rid of me that easy?”

I watch as she levitates down in front of my desk. The happiest day of her afterlife was when she figured out being dead meant one great big shopping trip with no credit card bills. Most ghosts I’ve ever known wear what they had on when they kicked. Not my girl. She accessorizes at will, and even she can’t tell me how she does it.

Right now, if I had to guess, I’d say she’s been watching one of those Kardashian-flavored shows again. It’s a damn shame that Helen is dead. Butt for butt, she could give Kim a run for her ass. Pun intended. And Helen’s got one up on Kim. She’ll be 25 forever and never drop a dime on Botox.

“You look like road kill, babe,” she said, perching on the edge of my desk. “Was he worth it?”

From behind me a cultured male voice purred, “If my heightened senses are an indication, the scent of satisfaction lingers on her skin.”

Any other guy implies I smell of “satisfaction,” he gets decked. With Johnny, however, I’d have to use a stake. He was born in 1782. Got himself turned by a vampire sometime around the War of 1812. He’ll be forever 32. He’s already giving me grief about my 40th in a couple of years. Don’t think it hasn’t dawned on me that at least in living years, I’m rapidly becoming the Mother Superior of this outfit.

“Back off, Fang Boy,” I growled, sipping my black coffee.

“You need only supply the necessary blood, darling Selby, and I will happily out distance . . .”

“Dwayne. Dear merciful heavens. Did you actually have relations with someone named Dwayne?”

“Can it, Johnny Dead Note, and drop the Masterpiece Theater accent.” He can tell from my expression that I haven’t had nearly enough sleep for a morning round of repartee with a revenant. Johnny telegraphs a silent apology, which I accept, and I get us down to business. “How about you dial up to the 21st century and tell me what came in on the board last night?”

I didn’t even have time to blink before Johnny was perched on the corner of my desk opposite Helen. I’ve known him for ten years and I’m still not used to how he moves without moving. I know Johnny works hard at passing for human, but he’s an old vampire. His kind aren’t just faster than we are. They inhabit a nether region of utter stillness and preternatural awareness somewhere between this world and a place we can’t even begin to comprehend.

So yeah. That’s us. Me, Helen, and Johnny. You know how there’s always the token gay guy on the reality show? I’m the token vital sign around here. My besties? Flat line city. 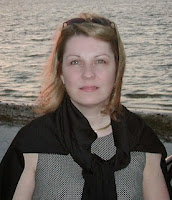 Juliette Harper is the pen name used by the writing team of Patricia Pauletti and Rana K. Williamson. Descendants of the Rose is the first installment of Harper’s debut Selby Jensen Paranormal Mystery series.


Pauletti, an Easterner of Italian descent, is an accomplished musician with an eye for art and design. Williamson, a Texan, worked as a journalist and university history instructor before becoming a full-time freelance writer in 2002.


Juliette Harper is also the author of The Lockwood Legacy, a nine-book chronicle of the lives of three sisters who inherit a ranch in Central Texas following their father’s suicide. Three of the novels are currently available: Langston’s Daughters, Baxter’s Draw, and Alice’s Portrait. The fourth book, Mandy’s Father, will appear in Fall 2015.


And don’t miss her hilariously funny “cozy” Study Club Mysteries, a light-hearted spinoff of The Lockwood Legacy. The books, set in the 1960s, take on the often absurd eccentricities of small town life with good-natured, droll humor. The first book, You Can’t Get Blood Out of Shag Carpet, will be available shortly, with the second, You Can’t Put a Corpse in a Parade, coming in Summer 2015.


a Rafflecopter giveaway
Posted by 3 Partners in Shopping at 11:43 AM