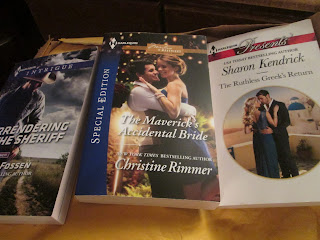 Chatterbox from House Party just sent me these three books to review and I really liked them. Whenever you talk about Harlequin Romances you know that you are able to get almost every kind of romance that you like.


They were nice enough to send me "Surrendering to the Sheriff" by Delores Fossen a book about sheriff Aiden Braddock who has to protect the mother of his unborn baby from the men who are holding her captive. They are asking him to go against all he believes in to save them both. What can he do? This is one of the books from the Harlequin Intrigue Series. I give this book a 4/5. All opinions are my own.


The next book I got was "The Ruthless Greek's Return by Sharon Kendrick part of the Harlequin Presents line. Loukas Sarantos is a Greek CEO. He used to be a man who protected other rich men by being their bodyguards. Now all  he wants is revenge. He wants to hurt Jessica Cartwright because she did not want him. He has become the CEO of a expensive jewelry company that Jessica advertises for. He wants to be her boss. What does their future really hold? I give this book a 4/5. All opinions are my own.

The third and last book is "The Maverick's Accidental Bride" by Christine Rimmer.  Christine Rimmer is a fantastic author and I really love to read her books. This is part of their Special Edition line. Will Clifton has attended a wedding of his friends and when he wakes up the next morning he finds out that he has just married an old friend Jordyn Leigh Gates. No one, least of all the both of them understand how or why this has happened. What really happened? How will their marriage turn out? I give this book a 5/5. All opinions are my own.

I received these books from Harlequin Romances and Chatterbox from House Party for an honest review.