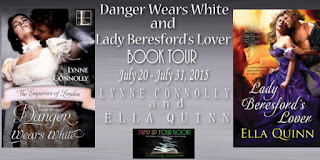 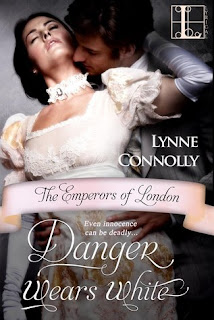 
“Full of political intrigue, steamy romance and plenty of twists and turns…a well crafted story that kept me on the edge of my seat until the very last page. If Lynne Connolly isn’t on your auto-buy list, she should be.”~Sharon Cullen, author of Sebastian’s Lady Spy


Hoping to live down her family’s connections to the traitorous Jacobite cause, Imogen wants nothing more than a quiet life in the country. When she stumbles upon a wounded man, the white cockade in his coat tells her he’s a Jacobite, and a danger to the crown. Yet there’s something about him she can’t resist . . .


In search of a document on behalf of his powerful family, Tony is shot and left for dead. Secreted away to a hidden chamber, he finds himself both a guest and prisoner of a beautiful but mysterious woman. What she wants and who she serves, he cannot know. But what he does understand is the desire burning strongly between them. And that neither of them will be spared until their lust is sated.


When the action moves to London, suddenly it’s Tony who has to act to save Imogen. Forced to become a lady in waiting to Princess Amelia, she is in peril from the Jacobites, who are convinced she is their salvation. Only the strength of Tony and Imogen’s love can save them now. 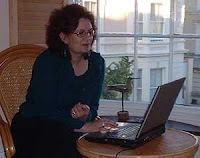 
I was born in Leicester, England, and lived in our cobbler’s shop with my parents and sister. It was an old house and most definitely haunted, but I didn’t find out until I left that my great uncle had hung himself in the living room! But I think our ghost might have been older than that. It was built on the site of the old Roman cemetery, and the land had been constantly inhabited, being in the centre of town.


Then, when the council bought the house from us to build a road, my grandfather retired and my father went and worked for the Post Office. My mother was a sample machinist; that is, she worked with designers on the prototypes (models or samples) of garments. So I was very well dressed! We bought a relatively modern house in the country, and my mother was blissfully happy. It’s all very well living in a large old house, but it’s a dreadful task to keep it clean and warm!


My mother’s side of the family are Romany gypsies, although sadly we haven’t any of the old trailers that are so astonishingly beautiful. I was taught to read the Tarot cards, and I usually use two packs; the Rider pack for simple readings and the Crowley Thoth pack for the complex stuff.

I’ve always had an interest in the paranormal and it’s been a delight to be able to put some of this into my novels.


My other huge interest is the historical. I love all periods of history, but my favorites are the Tudor and Georgian eras. I research and research, because I love it. I will travel miles to see a new variation on the Palladian mansion! I am fascinated in finding out how people lived then, and creating a credible story with people who lived in past ages.


After a painful heartbreak, Rupert, the handsome young Earl of Stanstead, has decided that when it comes to love, avoidance is best. Until he meets a woman who makes him forget his plan—and remember his longing for a wife and family. Yet he senses that she too has been hurt, though she attempts to hide her feelings—and more—in the most baffling and alluring way. Intrigued, Rupert is willing to play along, if winning her is the prize…


Crushed by her late husband’s scorn, Vivian, Countess of Beresford, believes she is monstrously undesirable. Sadly childless, she has moved to London resigned to a solitary life. Still, when she encounters Rupert at a masquerade ball, her disguise as Cleopatra emboldens her. Convinced he doesn’t recognize her, she begins an after-hours affair with him, always in costume—while allowing him to innocently court the real her by day. But when Rupert makes a shocking choice, will Vivian be able to handle the truth?…

Ella Quinn lived all over the United States, the Pacific, Canada, England and Europe before finally discovering the Caribbean. She lives in St. Thomas, Virgin Islands with her wonderful husband, three bossy cats and a loveable great dane.


Represented by the lovely Elizabeth Pomada, Larsen-Pomada Literary Agency and published by Kensington.