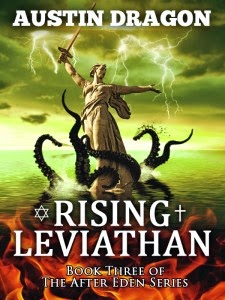 
Rising Leviathan is the latest sci-fi thriller in the After Eden series—a dramatic mix of politics, religion, and intrigue. The saga continues in the Russian Bloc (Yes, Russia “owns” Eastern Europe too) in the year 2096 with the inexplicable death of the Russian president. Or was it murder? As one leader falls, a deadly power rises. Will there be war or more than one? The march to the explosion of World War III continues— the first global war of the tek age, a hell we have never seen before.


Guest Post, thank you so much for being our guest.
Though I was born an artist, first drawing and then writing took over, with
my first book at three years old. Life happened and I had my corporate
career. I hadn't written anything in about 15 years, but something about the
After Eden Series snapped me back into writing. The three main themes that
lead me to the books were, firstly, I have always been good at predicting
trends, good, bad and everything in between. What if I could travel into the
future as civilian journalist? What would I see in terms of the culture,
politics, geopolitics, religions, technology, etc. The second theme was the
fact that virtually all science fiction that we see on television and movies
suggests that there is no religion in the future. We "outgrow" it. Whether
you're religious or not, with three-fifths of the planet belonging to one
religion or another, that is simply not even remotely believable. All Jews,
Christians, Buddhists, Muslims, etc. just disappear? Lastly, as a native New
Yorker and remembering when the Twin Towers were completed back in the '70s,
I was deeply impacted by Nine-Eleven. The image of the attack on the "Three
Towers," built by the descendant of one of the victims who became President
of the United States, became the opening of World War Three in my sci-fi
thriller series.