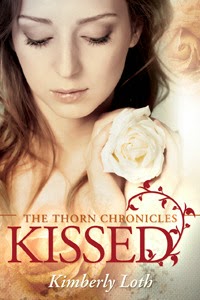 Summary from Goodreads:
Trapped in a dark cult, sixteen-year-old Naomi Aren has lived a quiet, albeit unhappy, life nestled deep in the hills of the Ozarks. With uncut hair, denim skirts, and only roses for friends, Naomi seldom questions why her life is different from other kids at school. Until the day her abusive father, who is also the cult’s leader, announces her wedding. Naomi must marry Dwayne Yerdin, a bully who reeks of sweat and manure and is the only one person who scares her worse than her father.

Then she meets Kai, the mysterious boy who brings her exotic new roses and stolen midnight kisses. Kisses that bring her a supernatural strength she never knew she had. As the big day approaches, Naomi unearths more secrets of about her father’s cult. She learns she has power of her own and while Kai may have awakened that power, Naomi must find a way to use it to escape Dwayne and her father—without destroying herself.


My father and Mr. Yerdin talked of politics and religion, not once acknowledging that anyone else sat at the table. Of course, I shouldn’t have been surprised since more than one sermon had been preached about the place of women and children. We were inferior and didn’t deserve an opinion that differed from our husbands’ or fathers’, so it was best that we just didn’t say anything at all. As the conversation turned to the medical experiments Dad performed on the dog that had been dumped in our yard last week, I tuned out and tried to think of what I would get if I crossed an Iceberg rose with a Sunsprite. A nice pale yellow and only a few thorns. Could be interesting. If Grandma were still alive, she’d appreciate it.

A quick glance at the clock told me they’d only been here forty-five minutes, but it felt like days. After another excruciating hour, Mother presented the cake. The carrot cake (my father’s favorite) had sixteen candles on it. I had not had a cake with candles since my eighth birthday. On that day, the cake was chocolate, my favorite, but that was before Father went insane. I missed those days, the ones before he went crazy. When he would come home and take me canoeing and fishing. When we would wake up early on Saturdays and go to breakfast at Sheila’s Café. I blinked back tears thinking of the father he used to be.

After the cake, I moved to help my mother clean up, but Father put a hand on my wrist, a signal to stay seated. The skin burned where he touched it.


Mr. Yerdin grinned. “Yes, of course she is. I wouldn’t expect anything less from you, Dr. Aren. Dwayne, what do you think?”


Dwayne shrugged and shifted his eyes. Me, I kept my mouth shut and listened for the words that weren’t being said.


Mr. Yerdin eyed me up and down. “Well she certainly has the required blond hair and blue eyes.”


“And she’s a virgin.” My father spoke this a little too loudly and I flinched. My mother paused before picking up Mr. Yerdin’s plate. She met my father’s eyes and nodded. Then the corners of her mouth turned up ever so slightly.


My stomach sank at the thought of what my birthday surprise would be. Although part of me did not want to hear the rest of the conversation, but to escape back into the quiet world of flowers and dirt, another part of me needed to know what my future held, where being a virgin was important.


I cleared my throat. Dwayne smiled a wide toothy smile and my father glowered like I’d done something wrong. Which, of course I had, but it would be worth the punishment if I got the answers I needed.


“Could someone please explain?” There. I asked the question. So out of character for me and yet satisfying in a strange way, like the way I felt when a teacher praised me for a good job. I bit my bottom lip and tasted butterscotch, which was weird because the cake we had, contained nothing of the sort. While I knew asking questions was not an act of disobedience, I also recognized the power in the asking. As if I was taking control, even if that control was small. I took a sip of my water. Father hesitated for a moment and then frowned. He looked up and saw my mother standing in the kitchen, her eyes boring into his. He didn’t look away from her when he answered me.

About the Author
Kimberly Loth can’t decide where she wants to settle down. She’s lived in Michigan, Illinois, Missouri, Utah, California, Oregon, and South Carolina. She finally decided to make the leap and leave the U.S. behind for a few years. Currently, she lives in Cairo, Egypt with her husband and two kids.

She is a high school math teacher by day (please don’t hold that against her) and YA author by night. She loves romantic movies, chocolate, roses, and crazy adventures. Kissed is her first novel.
Author Links: