Magic pushes them together. Reality pulls them apart.


Humiliated radio show host Jessica Stirling is a survivor, yet nothing prepares her for the stage trick that transports her across the country to a man suspiciously like the nineteenth-century folk hero idolized by Hollywood. About to lose her job, her life savings, and the home that matters to her more than love, she can’t stay stranded in the mountains with a dangerously appealing man who believes in elves.


Trapped in an Elvin world for a century, Scottish artist Aiden MacAuley is finally free and back on Earth. But he’s not home. He’s not safe. And he’s not alone. To prevent the destruction of his bloodline, he must get back to Scotland immediately. He can’t be distracted by the exasperating woman sent to him by a match-making elf, even if she does stir his lust like no woman has.


When she tries to heal the sins of his past, he can’t open his heart. There’s too much to lose and as the new guardian of the gate between the human and Elvin worlds, he isn’t free to fall in love.


If she didn’t know better, she’d think she was in a log cabin in the mountains. This set design was fabulous. The scene out the window looked so real, she couldn’t help feeling a little respect for the Alfar family of illusionists.


She felt him come up behind her. Why was he standing so close? Without turning, she asked, “Please direct me to the manager’s office. I’d like to speak to someone about Finn’s disappearing lady trick.”


His soft snort sounded in her ears. “You’ll not be finding a manager’s office here. Where do you think you are?”


She was about to say she must be under the stage, but her throat clamped down on the words. Two squirrels skittered around the trunk of a tree. She’d assumed it was some kind of video screen, but if that were the case, she’d not be hearing the faint chitter of the grey squirrel on the defensive.


But it couldn’t be. It was impossible for her to be anywhere other than the Empire Theatre in Mesa, Arizona. “Where do you think we are?” she countered, gaze fixed on the squirrels.


“It was my hope to be in the Highlands, but the air’s not got the smell of peat, nor whiskey, nor sweet heather honey.”


She spun around then, and would have bumped into him if he’d not taken a quick step back. “As in Scotland? Very funny.”


“No? Well then, you woke up on the wrong continent, buddy.” His pupils were slightly dilated, but his gaze was clear and steady. He obviously had quick reflexes, and he didn’t look delusional, but what did she know about psychotic episodes? His clothes looked like he’d been sleeping in them for longer than a quick nap. Perhaps he’d wandered into the theatre off the street. She took another step backward.


His sharp gaze flicked to that remarkably real backdrop. “How can you be sure?”


Because I’m sane. But she didn’t say that, of course. She was unsettled enough to not feel perfectly grounded herself. “If you can’t direct me to the manager, then I’ll find him myself, but this show is over.” She marched across the room, threw open the door to the pseudo living room, and stood dead still in the open doorway as a very alive, damp outdoor breeze blew in the scent of bug-infested woods, fish-filled lakes, and decomposing fungus.


She slammed the door shut, moved back to the bedroom and opened what looked like a closet door. Damn, a closet. She crossed the hall and whipped open another door—bathroom. Where were the stairs leading up to the theatre?


Perhaps she’d just thought she’d seen mountains when she’d opened the door in the living room—a mind warp from the stress of landing in a stranger’s bed. She headed back across the room, spared a quick glance at the stagehand who looked vaguely amused, and opened the door cautiously.


She stumbled across the threshold to stand on the wooden deck and face an illusion much too large to be contained to one theatre. Her lungs constricted. Tree-covered mountains stacked atop each other all the way to the overcast horizon. A liver-colored lake roiled in a pocket thirty feet below. Dark, dense woods pressed in on her like a surly crowd.


But they couldn’t be in the mountains. That was impossible. Arizona was desert. There was no such thing as magic, no disappearing lady.


She felt the blood drain from her face as reality struck.


She was losing her mind. This must be exactly what had happened to her nana. Every day, sitting in the Sunshine Acres Nursing Home, Nana thought she was living on her childhood farm in Saskatchewan, talking as though she were on the prairie, seeing the farm house, her mommy and daddy. Thinking it was all real.


Jessica had sudden early-onset dementia. Sinking to the deck, she wrapped herself up in her arms. She felt the vibrations of the stagehand walking around her, heard the smooth gait of his boots on the wood, and she would have chuckled if her voice worked—she’d thought he was crazy. If ever there was a kettle calling the pot black, she was that kettle.


“I’m not sure what Finn told you,” he said, “but you seem ill-prepared to be here, and that’s not good.”


An insect buzzed by her ear. Bugs! She swatted at it. “Yes, I’m quite ill-prepared—quite ill, period. I see mountains and a lake. How’s that for ill?”


“I see. And there were no mountains or lakes where you came from?”


She peered up at him. “Not mountains like these. I live in the desert.” She massaged her temple—maybe that would bring much needed blood to her head. “I’ve been under a lot of stress lately, and…my brain must have tried to compensate, but now it snapped. I’m seeing things that can’t possibly be there.”


He crouched down in front of her. “Your mind is sound, woman. You see mountains because we’re in the mountains. Finn sent you here because he likes to play games.” He slipped his hand over hers and pulled. “Come, stand up.”


At least he saw the mountains, too—a tiny acknowledgment. She tugged her hand away. She may be losing her mind, but she could still stand on her own two feet. One deep breath sent a good supply of oxygen to her head as she stood up. “Just so you know, your explanation does not make me feel better. People can’t go from the desert to the mountains in the blink of an eye. It’s impossible.”


His grin didn’t hold much humor. “Not impossible. People can’t. But elves can.”


He’d just re-established he was, indeed, crazier than she. “You see elves. Oh my, that’s good news. Maybe we can get adjoining rooms at the funny farm.” 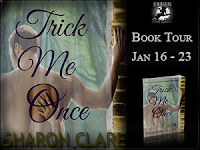 
She’s always been fascinated by the idea there’s more to the world than we perceive. That’s why she created Finn, a mischievous, match-making elf, from a world just a wee bit off Earth who believes every time love is experienced, energy empowers our worlds.


Life has enough difficult times, so it’s important to Sharon to write novels where happiness ultimately triumphs. She helps her characters overcome their demons, open their hearts, and find the love everyone deserves. When you reach the end, she strives to leave you in a happy place.


If you’d like a free book in the Magical Matcher series, please come visit Sharon at: www.sharonclare.com


a Rafflecopter giveaway
Posted by 3 Partners in Shopping at 9:16 PM