She's Like a Rainbow by Eileen Colucci Blog Tour and Giveaway

So begins Reema Ben Ghazi’s tale set in Morocco, SHE'S LIKE A RAINBOW. Reema awakes one morning to find her skin has changed from whipped cream to dark chocolate. From then on, every few years she undergoes another metamorphosis, her color changing successively to red, yellow and ultimately brown. What is the cause of this strange condition and is there a cure? Does the legend of the White Buffalo have anything to do with it? As Reema struggles to find answers to these questions, she confronts the reactions of the people around her, including her strict and unsympathetic mother, Lalla Jamila; her timid younger sister, Zakia; and her two best friends, Batoul and Khalil. At the same time, she must deal with the trials of adolescence even as her friendship with Khalil turns to first love. One day, in her search for answers, Reema discovers a shocking secret – she may have been adopted at birth. As a result, Reema embarks on a quest to find her birth mother that takes her from twentieth-century Rabat to post-9/11 New York.

Reema’s humanity shines through her story, reminding us of all we have in common regardless of our particular cultural heritage. SHE'S LIKE A RAINBOW, which will appeal to Teens as well as Adults, raises intriguing questions about identity and ethnicity. 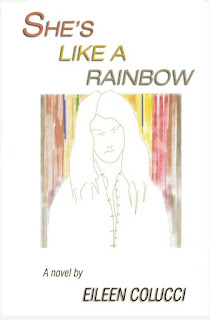 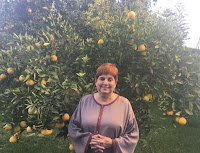 
Colucci holds a BA in French and English from the University at Albany and an MA in Education from Framingham State University.

When not writing, Colucci enjoys practicing yoga, taking long walks and playing with her chocolate Labrador Retriever, Phoebo. Now that she and her husband have four grandchildren, they spend as much time as possible in Virginia with their two sons and their families.


a Rafflecopter giveaway
Posted by 3 Partners in Shopping at 11:54 PM