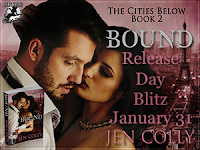 
The streets are a battleground for humans, vampires, and demons alike—where survival is a skill, love is a weapon, and the most dangerous act is to care for another . . .

Keir is an assassin devoted to Lady Arianne, the last of her royal bloodline. He is sworn to protect her, and that means eliminating any threat to her life. But while on a mission, he is set upon by a pack of demons, barely escaping with his life.

Cleopatra lives by a set of rules so rigid she no longer knows her true self. But her kind and loving nature resurfaces when she finds a man, bloodied and dying. Moved to help him, she risks her future and her life to save a stranger far below her aristocratic station.

Their attraction to each other is as powerful as it is forbidden. But even as their love grows, Keir keeps his true identity a secret—and this lie is not the only threat to their love . . . or their lives.


Cleopatra was utterly trapped. She longed to close her eyes and block him out, but fear of the unknown kept them wide open. The man had no weapon, couldn’t possibly mean to harm her. Except, would he really need a weapon? She couldn’t fight him, wouldn’t even know where to begin.


He studied her closely, and when his head tilted slightly, she noticed every bit of his focus fixated on her neck. Not a murderer. He wanted to mark her, to bite her neck, leave the wound to heal and forever bind her to him. This was why daughters of the aristocracy were kept under a tight watch. The mark, unbreakable and indisputable, would give this man access to her family’s wealth and prestige, and bind her to him until death.


He reached for her, head descending to her neck. Cleopatra quickly covered his target with both hands. Tears gathered in her eyes, sorrow distorted her voice. “I don’t want this. Please, don’t hurt me.”


The man rocked back as if she’d smacked him, and for the first time since he’d appeared, he looked at her face. His eyes met hers and didn’t look away as he brought his hand to her cheek and brushed away a tear. He saw her, truly saw her, and the adoration in his eyes sent a completely different shimmy down her spine.


In one step, he crowded her, pressing his cheek against hers. “Could never hurt you. My angel,” his captivating voice crooned, so close to her ear. He drew in a deep breath, his face buried in her hair. Then he whispered, “My Cleo.”


She gasped. The shortened version of her name on his lips sounded strangely intimate, as though he’d known her for years. The warmth rolling off his body kept her intensely aware of his close proximity, and she held her breath, waiting for his next move to prove his intent. He didn’t bite her, didn’t hurt her, and the sincere affection in his gentle touch left her so very confused. Any other man would have bitten her, taken advantage of the opportunity laid before him. But this man? His intent to bite her had been unmistakable, and he’d stopped because he…cared for her? She didn’t understand.


His hand slipped from her face, dropped to his side, and he staggered back, moving as if through a dream. He still watched her, but he swayed, that intense focus suddenly gone. The man crumpled to the floor with a heavy thud.


Dragging in a long, shaky breath, she blinked away tears she’d been staring through. A few more deep breaths, and she allowed herself to really look at him. He lay on his side, knees slightly curled, motionless. Something was wrong with him. People didn’t just fall over.


Gripping the railing, which had swiftly become her personal anchor, she pointed her foot and gingerly nudged his arm. When he didn’t move, she put more force behind the kick. Cleopatra jumped as his hand fell away from his ribs, thumping onto the floor. Blood coated his fingers.


He was bleeding? She’d missed the injury completely. The saturated, glistening spot had been hidden under his hand and camouflaged by his black button-up shirt. He’d been so close and she hadn’t… She glanced down at herself. Blood streaked across her pale blue gown, more evidence of his severe injury.


The elevator doors slid open. Oh God, if someone were to see them together in this state, what would they think? What would happen to her, or to him? Her heart hammered, panic flooding through her as she peeked out into the main corridor of Sterling.


The white, gold-trimmed corridor stretched on, empty. The elevator doors slid shut, and there it would stay, unless called. She might not have much time. Peering down at the unconscious man, she tried to fit the puzzle pieces together.


She’d mistaken his intent. He’d needed sustenance badly, and now he bled out, dying at her feet. Because of who she was, he refused to harm her, to take from her. How did he have the willpower to block his instincts from taking over, to stop from feeding?


Whoever he was, she had to save him. She dropped to her knees and pushed away any lingering fear under her newfound resolve. Tugging his shirt from his dark jeans, she searched for the injury. In the midst of his blood-slicked skin, the wound gaped open between his ribs. It looked like he’d been slashed, the nasty gash a result of being on the wrong end of a knife. Just a guess. She had no experience with this sort of villainy.


Her hand flew to her mouth. The murderer running loose in Galbraith used a knife. Could this man be yet another victim?


“Can you hear me? What happened to you? Who did this?” She awkwardly patted his whiskered cheek. His eyes fluttered open, then shut again.


“Balinese is safe.” His voice trembled, his words slurred without support from his shallow breath. “Paris. Demons.”


Cleopatra’s fingers fumbled as she pulled away his shirt collar. Several teeth-like gouges in his shredded skin oozed blood near his collarbone. Demons. They’d almost made a meal of him, and he was a bloody mess, but the real danger came from that knife wound. It looked deep, and if he’d been damaged internally and lost too much blood, he might not survive.


He needed blood now. She bit her wrist and pressed it against his mouth. His lips didn’t part, and his body refused to respond. A rivulet of blood slid down his cheek. He’d die if she didn’t fight for him.


Jen Colly is the rare case of an author who rebelled against reading assignments throughout her school years. Now she prefers reading books in a series, which has led her to writing her first paranormal romance series: The Cities Below. She will write about anything that catches her fancy, though truth be told, her weaknesses are pirates and vampires.


She lives in Ohio with her supportive husband, two kids, one big fluffy dog, and four rescued cats.