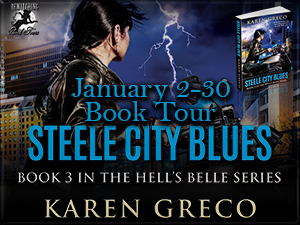 
Blood Ops leader Dr. O is chained in the bowels of Steele City, the state’s maximum security prison, and the clock is ticking for Nina and Frankie to bust him out.


Now that supernatural creatures are out of the closet, Providence is descending into an Apocalyptic wasteland. With the abrupt shut down Blood Ops, Nina and Frankie are on their own to save Dr. O and the other supernatural prisoners from certain death. Not knowing where Demon Mayor Bertrand’s loyalties lie, they are forced to rely on some questionable allies to battle Leila, a powerful vampire/witch hybrid hell bent on creating an indestructible supernatural army. She also happens to be Nina’s mom.


Alliances are tested and relationships fractured as Nina and her band of supernatural crime fighting misfits are pushed to the breaking point.


Karen Greco is originally from Rhode Island and loves hot wieners from New York System, but can't stand coffee milk. She studied playwriting in college (and won an award or two). After not writing plays for a long time, a life-long obsession with exorcists and Dracula drew her to urban fantasy, where she decapitates characters with impunity. Steele City Blues is the third book in the Hell’s Belle series, after Hell’s Belle (the first) and Tainted Blood (number two). She writes contemporary romance for a small press under the pen-name Jillian Sterling, and has a day job in entertainment publicity.

Tour giveaway 10 copies of the book in Kindle or Epub format.

a Rafflecopter giveaway
Posted by 3 Partners in Shopping at 11:35 PM