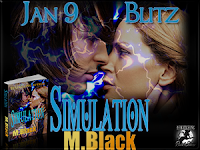 
SIMULATION is a fictional novel and is the debut release from Dystopian Thriller author M. Black.


A YA SyFy dystopia, along the lines of City of Ember meets CW’s The 100. This story will capture your heart and still won’t let go even at the end. Written in part while listening to Outside by Ellie Goulding, this story contrasts technology to nature, rich to poor, privilege to hardship, and illusion to reality.


“No one is getting in but whom we allow, and no one is ever getting out.”


Set in 2175 in Colorado, USA, where Citigogs are the new form of cities and citizens are kept under a careful population control, we meet Ilia the Princess of our main Citigog named Iliad, and Jez a Giver. As Ilia spends more time with Jez, she finds herself drawn to the Outside and ventures out of her Citigog only to learn that everything is not what it seems.


Fans of the Divergent and Hunger Games series will revel in this story about a strong, but disillusioned heroine who must become brave as she uncovers the truth about her world.


I hardly notice my attraction, but my fingers have nudged their way onto the platform as my chin tucks over the wood, and my eyes fix on the Givers moving speedily to and fro as if I’m watching a coveted movie, though none inside of Iliad are as good as this performance. Attention is drawn to my fingers when Jez approaches from my side and taps his foot at my forefinger. “If it isn’t the Princess Thief. Have you come to take more goods?”


I almost gasp. The guards had a strict talk with him about not speaking with me, and letting me take what I want—and yet here he is. Not that I expect that I should be able to do whatever I want, but I certainly don’t expect a Giver to not follow orders.


“Then why are you here? Isn’t that what you Insiders do best? Take?” Jez’s voice cracks, as if the word take weighs particularly heavy on him.


“I’m not here to take anything,” I say as my voice quivers, hands tremble, and my eyes flit around for focus.


“Then why are you here?” His brazen tone makes me uneasy.


His eyes dig deep into mine, waiting for an answer I can’t give. So, I answer a little shakily, “I just wanted to see the inner workings of the Center of Citigog Goods.”


Jez stares briefly, a smirk sliding across his face—not believing a word. Then he says snidely, “Curious how the other half lives?”


“Why do you keep attacking me?” I grit my teeth, my fingernails scratching the wood of the platform, my head fixed upward at Jez, sun glares hurting my eyes. “What have I ever done to you?” His audacity surprises me. I should be used to it by now. Every time I talk with him, he has nothing but ridicule for me. Still, I can’t wrap my brain around his disgust. No one speaks to the princess this way.


“Attacking you? You call a few words an attack?” Jez shakes his head and ruffles his fingers through his hair, releasing a loud huff of disbelief.


“You didn’t answer my question,” I press, keeping my eyes locked on his. He isn’t going to get away with it this time. Not without an explanation.


Jez pauses, his eyes searching me, and I can see questions circling his mind. “You really don’t know.”


“Know what?” My brow quirks, and he draws all my attention. I wouldn’t notice now if a Citiguard stood beside me.


“Anything,” Jez remarks, and I’m not sure if he’s just being smart or if he really cares about my so-called ignorance.


He squats so that we are eye to eye, and his smirk becomes more of a sadness, his color more of a pale crème, but his hair engulfs him—his square face and broad shoulders—as it falls to his chest. Then, I regret what I’ve just said. I feel I’ve hit him somewhere deep inside where even I didn’t intend.


“You live in your perfect princess castle, with three meals a day, and everyone at your beck and call. Safe from danger, and from the truth.” His head lowers, and he looks like he is about to cry, before he takes a deep breath and his head rises. “I won’t be able to enlighten you with anything but misery. I’m not a Giver. I’m a survivor.”


“Survivor of what?” I ask, not sure if he even heard me ask the question, because at that moment the dark-skinned man with the buffalo tattoo pushes beside Jez and tugs on his shoulder.


“Get going, Jez. Your tribe can’t handle another reprimand.” Jez looks at the dark man and nods before he pulls away from me and straightens up to return to the Box Carrier. As Jez walks away from me, the dark man hawk-eyes me. “You’re nothing but trouble for us. Why don’t you crawl back to your castle?” The corner of his mouth curls up as he turns back to Jez. I stand there, alone, lingering in questions. Survivor? Aren’t we all survivors of CR? What tribe? Safe from danger, the truth?


Everyone I come to for answers turns into another blockade, but I won’t let curiosities go unsatisfied this time. Jez knows something, something my aunt and mom know as well, something no one wants to tell me. I’ll watch him, and wait. He’ll lead me to what I want to know. He just has to.


M. Black is a pen name of Ami Blackwelder.


M. Black is her dystopia and thriller line of books. Rebecca May is the pen name for her historical and contemporary line of books. Ami Blackwelder writes paranormal and sci-fi novels.


Her stories range from Tween and YA to NA (new adult), but focus primarily on YA. Growing up in Florida, she graduated UCF and in 1997 received her BA in English and additional teaching credentials. Then she packed her bags and travelled overseas to teach in Thailand, Nepal, Tibet, China and Korea. Thailand is considered her second home now. She has always loved writing and wrote poems and short stores since childhood; however, her novels began when she was in Thailand in her early thirties.


Having won the Best Fiction Award from the University of Central Florida (Yes, The Blair Witch Project University), her short fiction From Joy We Come, Unto Joy We Return was published in the on campus literary magazine Cypress Dome and remains to this day in University libraries around the USA.


Later, she achieved the semi-finals in a Laurel Hemingway contest and published a few poems in the Thailand’s Expat magazine, and an article in the Thailand’s People newspaper. Additionally, she has published poetry in Korea’s AIM magazine, the American Poetic Monthly magazine and Twisted Dreams Magazine.