The forces of darkness are out to destroy mankind… Too bad they never reckoned on facing Maggie Child!


Army chopper pilot Maggie Child has a reputation for being fearless, professional and, above all, rational. But when she's shot down over Iraq her well-ordered life spirals into a paranormal nightmare. Alone, wounded and surrounded by hostile forces, Maggie is rescued from certain death by a demon straight out of Dante's Inferno. Then, barely alive, she's abducted by a private military corporation conducting insidious medical experiments. Her escape from their covert hellhole lands her on a Caribbean island where an evil voodoo spirit and a psychotic female dictator are conspiring to unleash an apocalyptic zombie plague. Then she uncovers the most terrifying secret of all—her own destiny. It seems a Voodoo oracle has ordained her the only warrior capable of saving humanity from a supernatural Armageddon … whether she wants the job or not!


But saving the world isn't a one-woman job, so she teams up with a trio of unlikely heroes—a conspiracy obsessed marijuana smuggler, a Voodoo priestess with an appetite for reality television, and a burnt out ex-mercenary. Together, they'll take on an army of the walking dead, with the fate of humanity resting in their eccentric hands.


Voodoo Child, Book One: Zombie Uprising is the first novel in a new horror series packed with supernatural thrills, rousing adventure, dark humor, Voodoo lore and plenty of zombie stomping action. But a word of warning; don't shoot these zombies in the head … because that just makes them mad!


It's the legions of hell versus Maggie Child … and hell doesn't have a prayer! 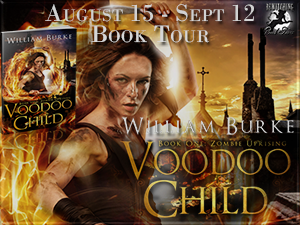 Voodoo Child, Book One: Zombie Uprising by William Burke is a fast-paced horror novel with quirky characters…Reviewed by Kim Anisi for Readers' Favorite


After two years of ghostwriting, William Burke has released his first novel VOODOO CHILD, Book One: Zombie Uprising. It's the first installment of a new horror series chronicling the exploits of Maggie Child and her Voodoo priestess partner Sarafina as they battle to save the island of Fantomas from the wrath of evil Voodoo spirits.


The author was raised on a diet of late night creature features, comic books, Mad magazines and horror stories. As a result every volume will be packed with eccentric characters, dark humor, chills, zombies, ghosts, monsters, military hardware and plenty of stuff blowing up.


Prior to writing Voodoo Child he was the creator and director of the Destination America television series Hauntings and Horrors. He has also written scripts for two Cinemax television series, Forbidden Science and Lingerie, which he also produced. He has also written magazine pieces for Fangoria and the Phantom of the Movies Videoscope among others.


William began his film and television career as a perfectly respectable video engineer at the venerable United Nations. Budget cuts shifted him to becoming a production manager and assistant director on an array of New York based indie films. With that experience under his belt he relocated to Los Angeles where he eventually produced sixteen feature films and two television series for the Playboy Entertainment Group. After years of producing T&A extravaganzas, kickboxing epics and gangster rap videos, he created a self financed television pilot entitled American Mystery Tour. Canada's CTV picked up the series under the title Creepy Canada, which was then re-titled Hauntings and Horrors in the USA. Since then he has successfully produced three series for HBO/Cinemax as well as documentaries and other … stuff.


After hundreds of hours of film and television production he is basking in the freedom of the written word, where small budgets and giant egos are only memories. He lives in Toronto.


If you enjoyed the first adventure please visit www.williamburkeauthor.com where you'll find lots of interesting information about Voodoo and military hardware, along with excerpts from Sarafina's personal diary AND, as a gift to readers, the author will be serializing a prequel novella