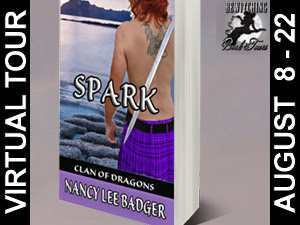 
Nancy Lee Badger brings you another story filled with Scottish dragons and shape-shifters. Set on the Scottish Island of Skye, she again fills her paranormal fantasy with romance and danger, and with characters you will remember. Some will tug at your heart. Others will make you wish for their demise. SPARK is the first book in a brand new series, Clan of Dragons.


What can a young dragon do to prove to his older brothers that he is their clan’s best chance to save their species? In the Black Cuillin Hills, Evan heads to the village of Morhban to find a way to interact with humans. To learn their language and customs, and to get close enough to a red-haired beauty to mate with her, the brown-winged purple dragon shifts into a copper-colored horse. When his new hooves protect her from Lord Toal MacMorgan’s inappropriate demands with a well-placed kick, she thanks Evan by brushing his silky coat. Things are looking up.


When an unfamiliar horse kicks Toal into the creek, releasing Vika from his roaming hands, her appreciation turns to horror. A sputtering Toal demands that the animal die. Anger makes Vika agree to a wager. A three day hunt will determine the fate of the horse she names Spark. Failure will mean his death, and the loss of her freedom. Pirates, wolves, a wild boar, and a handsome stranger lead her on a wild ride. She discovers her heart is in as much danger as her life.


Evan broke the kiss, and moved away, enough to make Vika’s hands fall away. He walked unsteadily to the bush, and stomped it until he had extinguished the fire. As he cooled his feet in the stream, he took a deep breath. He steeled his features, so as not to show her how bewildering her touch had felt. His chest hurt, which confused him. He wished to save his clan, so he would not allow his expression to show he was at war with himself.


Turning to face her, his shoulders stiffened. She had stopped crying, but her cheeks were damp with tears. Her skin was pale from fright, and she was shaking uncontrollably. His first concern was to let her know she was safe. The second was to keep his distance until he could discuss his new feelings with his brothers.


“Do you believe in dragons now?”


She nodded. “I thank you for saving us from that horrible demon!”


He laughed. “That was no demon. ‘Tis a dragon, one of a few that be said to live among the black rock peaks of the Cuillin Hills. Aye, they be large and dangerous, but when was the last time you heard of someone disappearing from your village? Wolves be much more dangerous.”


“Oh! I forgot about Orin and Spark!”


“Me brother Orin dealt with a wolf, today. Our horse, Spark, killed it by stomping on it.”


Evan grinned, and tightened the cloth around his waist. The air had grown chilly, and blew his hair across his face. Brushing it back, he watched her eyes widen.


His laugh echoed through the trees, and he turned away in order to catch his breath.


Striding inside the tavern, only a few villagers were seated in the dining area, enjoying a mid-day repast. Vika’s stomach growled, and Mistress MacFingan shoved a tankard of warmed spiced cider into her hand.


“Your cheeks have turned pink, so you must have ridden hard. The injured lass be right upstairs, and waiting on you with your brother, Orin.”


“Mistress, you amaze me.” All the villagers were wary of her ability to see things, but most ignored this trait due to her healing abilities.


Vika swallowed the cider, thanked the older woman, and headed up the stairs. She found Orin sitting beside Maeve’s bed, and the two were whispering.


“Mind if I interrupt?” she asked.


Orin jumped to his feet. “Vika! Here already? The meeting be not for an hour or so. I still need to talk to some villagers, and…”


“You sound like the devil has captured your tongue. Fear not, but I do need to speak to you on a private matter. Come with me?”


Orin turned and spoke softly to Maeve, who nodded, and settled lower into the bed. Orin helped cover her with warm blankets. Vika smiled at how chummy the two looked, but other matters had to drive them apart.


For today, at least.


Thinking of the pirates and the danger to the village gates, which would in turn put Maeve in danger, Orin needed to know what had happened.


She and her brother walked down the stairs, and found an empty corner near the hearth. The other villagers had finished their food, and had left. A server brought them both cider, and she swallowed several mouthfuls.


“Oh? Has Spark slipped away again, or has Evan Brown failed to show up and kiss you once more?” He chuckled.


As Vika recalled what she and Evan had shared in her cottage, her cheeks heated. She sipped her cider, and did her best not to react to her brother’s insightful words. How could Orin get one part correct?


Nancy Lee Badger loves chocolate-chip shortbread, wool plaids wrapped around the trim waist of a Scottish Highlander, the clang of broadswords, and the sound of bagpipes in the air. After growing up in Huntington, New York, and raising two handsome sons in New Hampshire, Nancy moved to North Carolina where she writes full-time. 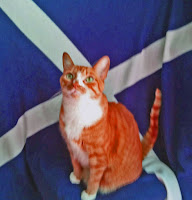