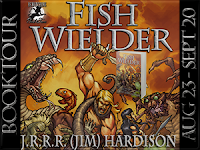 Fish Wielder is kind of like Lord of the Rings, set in Narnia, if it was written by the guys who made Monty Python and the Holy Grail while they were listening to the music of They Might Be Giants.

In ancient times, the Dark Lord Mauron cooked the most powerful magic chocolate dessert ever made, the Pudding of Power.

One thousand and two years later, the evil leader of the Bad Religion, the Heartless One, is trying to recover the lost pudding in order to enslave the peoples of Grome. Only the depressed barbarian warrior Thoral Might Fist and his best friend, Brad the talking Koi fish, have a chance to save the world of Grome from destruction, but that's going to take a ridiculous amount of magic and mayhem.


Excerpt:
“Come on, pal. Let’s get out of here,” Brad suggested, fanning himself with a fin. “We’ll
fight a monster or go on a quest or steal the jeweled eye from an idol or something. It’ll be fun.”
“My heart is too…” Thoral trailed off. “What is that word that means when something
has substantial weight?”
“Heavy,” the fish supplied. Thoral always had trouble remembering that one.
“Heavy. Yes. My heart is too heavy for adventure,” Thoral complained.
“Well, maybe if we pick something really hard, you’ll get killed,” the fish offered.
“A hero’s death?” Thoral asked, perking up just a bit.
“Yeah, sure. A hero’s death.”
“And then I couldst be done with this world,” Thoral murmured.
“Exactly,” Brad affirmed.
“Then let us go,” Thoral said, “this very instant.” He slammed his drink down on the
table so hard that some of the ale sloshed out of the tankard, splashing at the fish. The koi danced
back, just missing a soaking.
“Up to bed first and we’ll hit the road in the morning,” Brad countered, stepping around
the puddle of spilled drink.
“No, we will leave now.” There was a dangerous edge to the warrior’s tone that drew the
attention of everyone in the room even though he had not raised his voice. The bar went silent.
“Look, Thoral,” the koi answered, “it’s getting late. I’m tired. You’re drunk. We could
both use some sleep. Let’s not make a rash decision that might lead to all kinds of unexpected
complications.”
Every eye turned to see the barbarian’s reaction.
“We will leave now,” Thoral insisted. The warrior and the fish stared at each other.
“Be reasonable,” Brad tried again. “Just give me one good reason why we shouldn’t wait
until morning.”
“We will leave now,” the barbarian declared, “because I am Thoral Mighty Fist!”
Everyone gasped. Brad sagged, defeated. Once Thoral noted that he was Thoral, there
was no point in arguing further. Everyone knew it. That’s just how it was.

“This is one wild romp! I'm not sure I've seen such preposterously determined critic-baiting parody since Xanth or Asprin's Myth-Begotten series. I recommend it to anyone.” ―Piers Anthony, New York Times Bestselling Author

"A great time. Fast and funny, it races along in a self-aware tone that should appeal to anyone who loves fantasy but has ever found themselves thinking, huh, that was a little melodramatic." ―Clay Johnson, author of OFF TO SEE THE WIZARD (Ravenswood Publishing, 2016)

Fish Wielder is J.R.R.R. (Jim) Hardison's first novel novel (He wrote a graphic novel, The Helm, for Dark Horse Comics). Jim has worked as a writer, screen writer, animator and film director. He started his professional career by producing a low-budget direct-to-video feature film, The Creature From Lake Michigan. Making a bad movie can be a crash course in the essential elements of good character and story, and The Creature From Lake Michigan was a tremendously bad movie. Shifting his focus entirely to animation, Jim joined Will Vinton Studios where he directed animated commercials for M&M’s and on the stop-motion TV series Gary and Mike. While working at Vinton, he also co-wrote the television special Popeye's Voyage: The Quest for Pappy with actor Paul Reiser.

Jim has appeared on NBC's The Apprentice as an expert advisor on brand characters, developed characters and wrote the pilot episode for the PBS children's television series SeeMore's Playhouse and authored the previously mentioned graphic novel, The Helm, named one of 2010's top ten Great Graphic Novels for Teens by YALSA, a branch of the American Library Association. These days, Jim is the creative director and co-owner of Character LLC, a company that does story-analysis for brands and entertainment properties. He lives in Portland, Oregon with his lovely wife, two amazing kids, one smart dog and one stupid dog.


a Rafflecopter giveaway
Posted by 3 Partners in Shopping at 11:38 PM