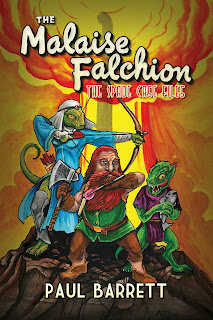 
Disgraced during the Demon War, Dwarf investigator Snazdaggin Kundarik (Spade to his friends) wants nothing more than a desk to sleep on, a bottle of grog to drink, and the occasional easy case for quick pay.


Then a mysterious female Elf from the posh side of town shows up and offers him exoneration for his past sins and lots of gold. All he has to do is follow her brother and report his activities. Simple, right?


He should have known better. The simple job soon spirals out of control. Spade finds himself sucked into intrigue, powerful magic, and the hunt for a weapon powerful enough to end the world. Ill-prepared, Spade forges on with the aid of his hapless sidekick and a reluctant female warrior.


Will he survive long enough to save the world and get his grog?

Paul has lived a varied life full of excitement and adventure. Not really, but it sounds good as an opening line.


This eclectic mix prepared him to go into his true love: motion picture production. He has produced two motion pictures and two documentaries: His film Night Feeders released on DVD in 2007, and Cold Storage was released by Lionsgate in 2010

Amidst all this, Paul has worked on his writing, starting with his first short story, about Ziggy Stardust and the Spiders from Mars, at age 8. Paul has written and produced numerous commercial and industrial video scripts in his tenure with his forcreative agency, Indievision. He has two published short stories (As You Sow and Double Cross) and one self-published novel (Godchild). He lives with his filmmaker/graphic artist partner and their three cats.