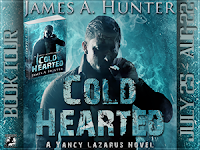 
Yancy Lazarus is back and facing off against his most dangerous foe yet—without the benefit of his magic. A breakneck thriller that'll keep you turning the pages!


Yancy Lazarus just wants to be left alone. He wants to play his blues music, smoke a few cigarettes, and otherwise leave the supernatural world to fend for itself.


He especially wants to be left alone by the Guild of the Staff—the mage ruling body—where he used to work as a Fix-It man. But when a little kid gets nabbed by an ancient Fae creature from the nether regions of Winter and the Guild refuses to set things right, he just can’t seem to heed good sense and leave things be.


Nothing’s ever easy though. Turns out, the kidnapping is just the tip of one big ol’ iceberg of pain and trouble. It seems some nefarious force is working behind the scenes to try and unhinge the tenuous balance between the supernatural nations and usher in a new world order. So now, if Yancy ever hopes to see the bottom of another beer bottle, he’s gonna have to partner up with an FBI agent—an agent who’s been hunting him for years—in order to bring down a nigh-immortal, douchebag mage from a different era. And to top it off, Yancy’s gonna have to pull it off without his magical powers … Boy, some days just aren’t worth getting out of bed for.


The tunnel stretched out before me like the throat of some monstrous serpent, icy blue walls radiating pale witchlight to guide my feet. I shuffled along the winding pathway, trying for speed and failing miserably. There was snow underfoot, but the powder was often interspersed with patches of slick ice, which made the going treacherous as hell. It didn’t help a lick that my feet were so numb I couldn’t feel my toes, even though I had on heavy boots and thermal socks. Every friggin’ step felt like a crapshoot and I wasn’t quite sure how the dice would land.


I heard a howl from somewhere back in the darkness, a warbling noise that echoed and bounced around the narrow tunnel. I glanced back for a moment, which is precisely when my feet skidded out from under me and I went down hard, my ass connecting on the slippery ground below. My hip ached from the tumble, but at least my head landed in a pile of snow instead of on hard ground. I lay there for a moment, staring up at the curved ceiling, simmering in indignation.


Why me? Why couldn’t I ever just keep my head down and mind my own friggin’ business? I felt like kicking my own ass for being such a gullible, softhearted mook. Shit, the least I could do was be a little more selective. Tell people I’d only do them favors if the location was somewhere nice and beautiful … like say, sunny, sandy, not-cold-as-balls Honolulu.


I guess, technically, Thurak-Tir—home to the High Fae of the Winterlands—was a beautiful-ish place, so long as you’re the kind of person who doesn’t mind the arctic tundra of Siberia. The buildings are impressive at least: slick spires of frost, carved and sculpted into a thousand wonders; a house fashioned to resemble a frozen waterfall; a palace made of snow and crystalline-rime in the image of Yggdrasil, the Tree of Life; a tower in the shape of a serpentine neck, complete with scales, topped by a massive dragon’s head. Under the light of day, the whole city sparkles like a diamond, and at night beautiful slashes of green and gold drift through the air, a semi-permanent Aurora Borealis.


But it’s also piss-freezing cold and only beautiful in the way a statue is—lifeless, still, too perfect. And the residents are all the same. Bunch of too-good-for-you, cold-hearted pricks. I absolutely hate Thurak-Tir. Give me a warm New Orleans night in a dirty bar with a crowd of shit-faced hobos any day of the week.


Down in the subterranean caverns below the city, where I happened to be trudging around, was even worse. Monsters, spirits, and a whole lot of frigid air. The light of day never penetrated these depths, so the cold … well, the cold seemed both malevolent and alive, like some frostbite-belching yeti.


More yowls and howls, followed by cackling laughter: Ice gnomes—not nearly as cute or cuddly as they sound—closing in, and fast. Time to move.


I scrambled onto my hands and knees, gaining my feet like a clumsy toddler taking his first steps, and shambled away from the chorus of mocking laughter. Creepy little twerps.


If I was going to make it out of this place in one piece, I needed better lighting. Thankfully, I’ve got something a little handier than a flashlight. I can do magic, and not the cheap stuff you see in Vegas with flowers or floating cards or disappearing stagehands. People like me, who can touch the Vis, can do real magic. Although magic isn’t the right word—magic is a Rube word for those not in-the-know. Users just call it the Vis, an old Latin word meaning force or energy. Simply put, there are energies out there, underlying matter, existence, and in fact, all Creation. It just so happens that I can manipulate that energy. Period. End of story.


I paused for a moment, and opened myself to the Vis. Power rolled into me like magma from an active volcano, heat and life and energy filling me up, sending renewed strength into my limbs. I was careful only to draw a little and push the rest away—unchecked, the Vis can be as seductive and dangerous as a beautiful woman with a grudge.


Weaves of fire and air flowed out around me as I shaped that raw force; a soft nimbus of orange light encircled me, granting both better visibility and a small pocket of comforting warmth. Sure, it would make me stand out like a dirty redneck at a posh country club, but there was nothing I could do about that.


I got moving again, huffing and puffing my way along. More frenzied cries floated toward me from the tunnel twisting away behind. I needed to move faster, but the gloom still hampered my progress, forcing me to slow down and take my time. Even with the combined illumination from my construct and the ghostly witchlight bleeding from the walls, I could only see a few feet out. This was a night place, a dark place that fought the intrusion of light and heat with tooth and nail.


Even going sloth-speed, I almost didn’t see the cliff until my feet were over the edge. I hollered and threw on the brakes in a panic—digging in with my heels and pinwheeling my arms as I fell once more onto my back. I landed with a whuff of expelled air and immediately sprawled out my arms and legs. The greater surface area seemed to slow me down a little, but not enough. My legs skittered over the side, drawing me onward and downward. I clawed at the unyielding ice with numb fingers, my thin winter gloves making it all the more difficult.


I pulled more power, more Vis, into my body, and pushed thin strands of fire out through my fingertips. Small divots blossomed into the ice-covered surface of the floor, little grooves where my digits could find purchase.


Unfortunately my gloves began to smolder from the flame, the leather sending up curls of gray smoke. I ignored the heat—survival was my first priority. I dug in, giving it everything I had, arms and hands straining with the effort.


At last I skidded to a halt, my slide coming to a premature stop though it was a damn close thing. The tension in my arms and hands eased up as I slowly, carefully, pulled my hips and legs back from the drop-off, though my feet still dangled out in the air. Past the drop-off was blackness all the way down with no bottom in sight. Admittedly, the soft glow surrounding my body didn’t do much to diminish the gloom. Hell, the bottom could’ve been ten feet down or ten thousand. Better not to find out by taking a leap.


My heart thudded hard against my ribs. I’m not exactly afraid of heights, mind you, but anyone would be apprehensive about the prospect of careening off a cliff into potentially unending blackness. I took one more glance over the edge and uttered a sigh of relief. Whew. Dodged a bullet there.


I heard a hoot of mirth just a second before something hard and heavy collided into my back—a wallop right between my aching shoulder blades.


My fingers tore free of their meager holds and over the drop-off I went, manic gnome laughter filling my ears as I fell. I tumbled down and down, flipping through the air like a fumbled football. I caught just a brief glimpse of a short, knobby form peering over the edge, his whole stumpy body shaking as he cackled. Asshole gnomes.


I lashed out with air—great columns of the stuff—directed down to slow my descent. That was a start, but the construct wouldn’t keep me from getting impaled on a giant icicle or busting my guts open on a rocky outcropping.


So next, I pulled in strands of artic cold, weaves of spirit and reinforced bands of fae power, floating through the air like so much dust. A shimmering bubble of green—shifting from emerald to pine to jade and back again—snapped into place with an effort of will, encompassing me in a tight globe of power, exerting a slight pressure on my body. A small safeguard against pointy things and an air pocket to cushion my body from the inevitable impact.


Hey all, my name is James Hunter and I’m a writer, among other things. So just a little about me: I’m a former Marine Corps Sergeant, combat veteran, and pirate hunter (seriously). I’m also a member of The Royal Order of the Shellback—’cause that’s a real thing. I’ve also been a missionary and international aid worker in Bangkok, Thailand. And, a space-ship captain, can’t forget that.