Rise of a Viking


Cybil is thrilled when she and her family inherit a million dollar ocean-side house in Winter Harbor, Maine. It’s a chance to finally bring her sisters back together and right old wrongs. But problems arise. Her gift of prophecy grows stronger. A Viking from the past haunts her. And that old ash tree in the front yard? It has taken on the otherworldly qualities of Yggdrasill, a tree that connects the nine worlds in Norse mythology. Soon caught in its power, she’s whisked back in time to tenth-century Scandinavia.


Of dragon blood and set to inherit the throne, Heidrek Sigdir tries to keep Cybil away, but the gods have other plans. A fate designed to make him pay for past grievances. Yet when he finally lays eyes on her, he wants nothing else. They share a connection unlike any other. Poignant desire. Incomparable need. Tempting change. Even so, he must let her go. She should be with his brother. Still, nothing is what it seems. A new enemy is determined to destroy all and Cybil is special to him and his people in ways nobody anticipated.


Many revelations come to light when Heidrek and Cybil are forced to journey across the rugged lands of Norway to reach the home of the seers at the peak of Mt. Galdhøpiggen. Hearts will be tested and lives forever changed. Will a new Viking King rise up and keep his people safe? Or will his endless draw to a modern day woman be his ultimate ruin?


Everyone said their goodnights as she climbed the stairs. Thankfully, there was a deck off her bedroom. One she utilized despite the storm. Elbows braced on the railing, she stared at the tree, her thoughts still on Heidrek. Some might say he haunted her, but she didn’t quite look at it like that. Not when he was trying to keep her away.


Not when he was somehow trying to protect her and her family.


She thought of those that might be his family. Lightning crisscrossed the sky, illuminating the choppy ocean. Kol was a relative. She closed her eyes and focused on the name and let it lead her to others. Kol’s brothers. Naðr Véurr…a king. Raknar. All the men who had ended up with Amber’s sisters. Her thoughts chased them until they focused on a young blond boy with a stutter and deep sadness. He grew, changed, became a man.


Her eyes snapped open, and she focused on the tree again. He had become something unexpected. What he became changed everything. It would make him a king.


Someone so important that it drew attention. She blinked and shook her head as thunder crashed and the rain fell harder. No, he drew attention by his actions. He brought trouble to his people…to his family.


That’s what he had been trying to tell her all along.


And she would. He needed to know that.


Cybil didn’t realize what she was doing until she was down the stairs off her deck and heading for the tree. The wind was strong, and the rain cold but nothing touched her. She needed to be beneath the ash.


She needed to understand.


Hands braced against the cool bark, she stared up but saw nothing beyond flashes of lightning. Yet she felt something. A slight vibration that had nothing to do with the endless thunder. Her eyes dropped to her feet. To the root.


“Stay away,” whispered close to her ear.


Her eyes shot to the right, and her breath caught.


There he was. Gorgeous. Masculine. Intense.


At least a foot taller than her, he had dirty blond hair, stubble on his strong jaw and the same, piercing blue eyes she had seen in the photo. He wore a red tunic and brown fur over his broad shoulders.


Her eyes fell to the bear pendant hanging around his neck. “You use that to connect us and protect me. Does that mean keeping me and my family from traveling to you and yours?” she whispered as she shook her head and met his eyes again. “Because it won’t. It isn’t working.”


He started to talk but stopped, confusion in his eyes. “It should only connect us. Protect you. Nothing more…” His eyes roamed her face before they went to the house. “Please. You must stay away for the safety of your kin.”


Cybil was caught off guard by the flicker of desire in his eyes. More so, by her sharp response to it. She frowned and shook her head. “I’m trying.” She tried to tear her gaze from his but couldn’t. “Tell me what to do.”


“Run from here. Get away from this tree.” She sensed that he wanted to reach out but didn’t. “If you stay, I cannot stop this.”


“But you led me here,” she whispered, desperate to understand. “Didn’t you?”


His eyes roamed her face again or at least she thought they did as he started to fragment. “I…do not know.”


She sensed his surprise at the use of his name. But then she was equally shocked when he whispered hers before vanishing altogether. 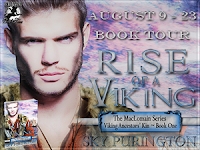 Sky Purington is the best-selling author of over twenty novels and several novellas. A New Englander born and bred, Sky was raised hearing stories of folklore, myth and legend. When combined with a love for nature, romance and time-travel, elements from the stories of her youth found release in her books.


Tour giveaway A $25 gift card to winner’s choice of Amazon or Barnes and Noble.