Worth Dying For by Kory M. Shrum Book Tour and Giveaway


Dying for a Living Series


A supernatural suspense novel about a snarky anti-heroine and her motley crew trying to stop the unstoppable. The fifth novel in the popular Dying for a Living series, Worth Dying For picks up two months after the events of Dying Light.


The gang is in New York and much to Jesse’s surprise, they are all still alive. Jesse, Ally, Rachel, Gideon and Maisie have managed to stay off of Caldwell’s radar for months. But when your enemy can control minds and teleport, there isn’t a safe place in the world where you can hide. They have a plan for stopping his genocidal reign, but it will require a 2500-mile road trip to Cochise, Arizona, the abandoned military base where it all began. 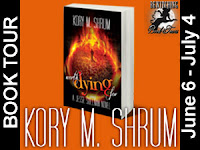 Shrum's writing is smart, imaginative, and insanely addictive! I have begun to think of her books as my Kory Krack. I beg of you to pick them up. You will NOT regret it! ~ Darynda Jones, New York Times Bestselling Author of the Charley Davidson series


This book and author are now among my favorites! Wow! I might be a little partial to this story because I love morbid comedy, urban fantasy, and a good mystery. I'm also a big fan of original ideas, since they're so rare anymore. But this one has it all! ~ Angela Roquet, author of the Lana Harvey Reapers Inc. series


Shrum is a master at blending a breezy narrative with genuine weight to story and characters. Hysterical, moving, and fascinating all at once. ~ John K. Addis, author of The Eaton


“So what’ll it be?” I ask her. “Water? Juice? I don’t think we actually have Gatorade, but I can walk down to the store.”


“Water’s fine.” Ally falls back against cushions and grins up at me. A light pink blush spreads over her cheeks. She finger-combs her hair. “My hair is so pretty. I love my hair.”


“What else about me is cute?” she asks.


“Everything.” I fluff the pillow for her and search the room for a blanket. I yank a red velvety throw off the back of a chair as Gideon slips out of the bedroom and passes me on his way to the mini fridge. He grabs one of the wrapped water glasses from the bar above.


“Grab us one too.” I have zero problems assigning tasks to other people. Sometimes I wonder if it was a mistake going into death-replacing. Sure, I was a great death replacement agent, and dying for other people is cool, but I’m really good at bossing people around.


Gideon fills two water glasses with some fancy bottled water from the fridge and hands me a glass. I don’t dare remind him that Ally vowed not to drink this water yesterday. She ranted about the effect of plastic on the environment for ten whole minutes. I could’ve reminded her that the planet is about to explode anyway, but that meant Gideon would’ve won the argument and I’m Team Ally all the way.


I put the glass of water in her hand. What she doesn’t know won’t hurt her. “Here you go. Drink up.”


She waves her water around. “I just feel so good, you know?”


She runs a hand through her hair. “It’s a new year. A new beginning. And we have a great plan for kicking Caldwell’s butt.”


“And you’re so cute and you kissed me.”


With arched eyebrows, Gideon closes the bedroom door behind him. Thankfully, the sound of the television comes on, affording us some privacy.


I sink down onto the sofa beside her. “I’ll do it again if you want me too. I’ll kiss you a million times.”


She bites her lip and I’m about to lose it. I lean forward to kiss her but she starts talking again, so I hang there mid-smooch, lips puckered.


“Life is so good right now. No one is stabbing us, burying us alive, beating us up, or kidnapping the dog,” she goes on, her voice echoing inside her water glass. Her face pinches. “That means we are probably about to die.”


I press my lips together and sigh. “Don’t say that. You’ll jinx us.”


It’s difficult getting her to sit up, but I manage it. I want her to drink this water. I tilt the glass toward her lips, encouraging her.


“This is good,” she says and frowns at the water. “Is this tap water?”


“Because I’m not drinking that $15 water Gideon bought.”


Ally shrugs and finishes the glass. Then she hands me her empty glass.


“We’ve got chips, but that’s about it. And Rachel can’t close a bag to save her life, so they’re probably stale.”


She shakes her head, grinning.


Then I realize what she’s saying.


She crawls over the pillow between us and pulls herself into my lap. She straddles me, wrapping her arms around my neck. She kisses me once on the cheek, probably a missed target rather than a sweet gesture, and then manages to get my mouth the second time.


She laughs and looks down at herself. “Oh. Right.”


I reach up behind her and pull her jacket off. “Better?”


“Let me help you take your coat off.”


“Okay.” I let her attempt to pull off the jacket, but it’s not really going anywhere and she accidentally pulls my hair twice. So I help her get my jacket off and throw it over the arm of the sofa. One of the throw pillows falls to the floor with a poof.


Ally doesn’t stop there. She slips her hands under my shirt, giving me a curious look. “Is this okay?”


I try to find the voice to tell her it’s more than okay. She would have been naked an hour ago in the grubby bathroom of some bar if she wasn’t such a germaphobe.


She is so beautiful. Her eyes are bright, reflecting the lamplight. Her face is flushed from the alcohol, her smile lazy. Her eyes half-closed. My heart pounds in my chest, thudding against my ribs so hard it hurts.


“What’s wrong?” A frown creases her face and I think she can hear my heart throbbing. “Don’t you think I’m pretty?”


I reach up and pull her down into my arms. I kiss her, even more deeply than I did on the balcony. I slip my hand under her shirt and unsnap her bra with one twist of my fingers.


She gasps in my mouth and the sound of it makes my whole body shudder.


She laughs, surprised, but her voice goes all deep and breathy. “Yes, sir.”


I climb on top of her, positioning myself between her legs. I kiss her neck and she squirms, bucking her hips up against mine.


I cover her mouth with mine. “Please stop talking.” I pull back. “Unless you want me to stop.”


“No, no.” She grabs the front of my hoodie, twisting it up in her fists and pulls me down on top of her.


Kory M. Shrum lives in Michigan with her partner Kim and her ferocious guard pug Josephine. She is very fond of naps and foods made of sugar, which is, as you can imagine, a deadly combination. But she tries to compensate for her extreme physical laziness with her overactive imagination. She's an active member of SFWA, HWA, and the Four Horsemen of the Bookocalypse, where she's known as Conquest. She's the author of five contemporary (and somewhat dark) fantasy novels in the Dying for a Living series: Dying for a Living, Dying by the Hour, Dying for Her: A Companion Novel, Dying Light, and Worth Dying For.


Dying for a Living has over 190 5-star reviews and is a free ebook.


When not writing, she can be found teaching, traveling, and wearing a gi. She's very likely to tempt you to an ominous tarot or palm reading--anything spooky-foo to pass the time until Guardians of the Galaxy or Sherlock return. She's not-so-secretly dying for the next season to begin.


1 grand prize: A prize pack of signed books 1-5 in Dying for a Living series as well as swag and treats. (US Only)