Aftermath is a growing series about war, love, brutality and most of all, survival. What was once the United States has become a savage post-apocalyptic environment where the worst of the worst prosper and the remaining good hide.


The series features a brutal setting, where seven characters in different parts of the United States must adapt to this new environment. The "fight or flight" mentality plays into the story, as the nation is divided into factions fighting for control of the country. The government is outnumbered, outgunned, and forced into hiding as well to recoup their forces. The novel follows a fast paced momentum from the first page to the last word. The plot pits these characters against the elements and each other, with plot-lines intertwining on opposite sides of the war effort. And one character's quest for revenge can jeopardize not only the war outcome, but the reshaping of the entire nation.


With an ever-changing storyline and evolving characters, the Aftermath series gets more intense with every chapter. But what these characters don't realize, the terrifying evil is making its way across the ocean.


“People and beans again?” a raggedy-looking man says as Sara passes him a plate. He glares down, disappointed, at the meal of perfectly cut human flesh and a side dish of green beans. Sara hands out more plates to the group of men huddled around a fire.


“When you guys kill something other than people, you’ll get something else to eat,” she says with a sarcastic smile, walking off.


It’s near-insane to talk back to these guys. They are psychotic killers, but she is protected. Marcus, their leader, has taken a liking to her. So it’s a choice of be killed, be raped and then killed, or be his willing sex slave.


Sometimes she doesn’t know if she made the right choice.


Before going back to the kitchen, she stops by every group to see if they all have something to eat. Dozens of groups gather around, having their breakfast. The field is littered with dirty men and women feasting on human remains.


Probably over a hundred in total, she guesses.


The Savages is what they are called. The group started after the bombs fell about five years ago. They were small at first, but they’ve since grown into a much larger army. This gives them better resources and a nice cut of whatever they take from towns.


All they do is kill and raid villages. They swoop in, kill, take everything, and leave. They take in recruits, sometimes, if they seem to fit the part. The survivors don’t last long. They are usually killed and displayed as a message to discourage others.


For years they tried the whole nomad lifestyle, but when the army got bigger, they realized they had to settle down.


It’s a lot easier than constantly uprooting the whole camp.


They have no reason to leave. There are always animals in the forest. A river provides fresh water and fish. Armies are too afraid to attack them. They can’t survive an all-out military assault, but the government has much more important enemies than them to worry about.


They all wear custom-made armors consisting of materials they find on the road. Sports gear is a big part of it: elbow pads, football pads, helmets—anything they can find. A lot of it is hand-sewn and made from animal skins.


The farm would also pose a problem for moving. Horses are bred and domesticated as transportation. Without cars and without gasoline to run them, they are a necessary component of life here.


Each Savage has the brand of an S on the back of his or her shoulder, indicating initiation into the group. It is given after their first kill. After a big massacre and initiation, they will celebrate with a great feast: their victims.


Sara never likes thinking about how many people one dead body feeds. The thought makes her sick. The taste has always bothered her. She may force herself to eat flesh when she absolutely must, but she is and always has been a vegetarian . Even when they spruce it up with spices and other ingredients, it is still a person, and no amount of sauce can change that.


Sara’s stomach starts to rumble. She hasn’t eaten much in days. Usually, she is able to sneak extra beans and vegetables because the others love flesh, but the shortage of them is now beginning to hit her.


Hopefully, Penny can get me something, she thinks, walking into the large kitchen tent. The sight doesn’t help her appetite. Penny is in the middle of carving someone up.


“Three years of culinary school and I’m making foot filet for a hundred ingrates,” Penny mocks as she hacks off a foot with a butcher’s knife.


Sara feels sick again. She covers her mouth to hold the vomit back. The smell of blood is too much.


“Aww, sweetie, not feeling good?” Penny says affectionately, walking up to her. She doesn’t get it, her shirt is covered in blood and it’s making Sara sicker, but she needs a hug.


“One of Eric’s men gave it to me.” A gold snowflake hangs from the end, surrounded by pretty little stones.


Penny’s face betrays her disgust. “The creepy looking one with the cuts.”


The kitchen tent is filled with people preparing food for the group. There’s a huge fire going, and the bodies are put on a metal gate over the fire to barbeque. The Savages know that uncooked flesh can kill them. They are as smart as they are ruthless. That’s why they’ve been around for all five years.


Sara shakes her head. “He’ll probably make me eat with him later.”


Penny sighs but says nothing. They both know what Marcus is going to do to her. Sara will have to eat flesh again, among other things. Penny doesn’t like the idea of eating people either, but she is a chef and can trick herself into thinking she’s eating something else. With all the spices she’s schooled in, it’s almost easy.


Everyone who doesn’t like it has ways of coping, but most of the Savages love the taste and the trophy. Eating the very people they killed makes them feel tougher. Sara would be the first to admit the taste of it isn’t bad, but that freaks her out the worst.


“You smell nice today,” she says from Penny’s arms, covered by her blonde hair.


“I found some shampoo. I’ll give you some later tonight,” Penny says with a smile. “Now come on, you have to bring the men food. The meeting’s starting.” Penny releases her, only to hand Sara a tray of appetizing human parts and vegetables. “How do I look?” Sara inquires.


Penny adjusts a few out-of-place strands of hair on her head and smiles. “You look great.” 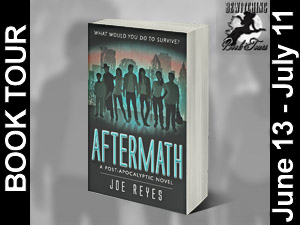 
Joe Reyes has never been afraid to go for what he wants in life. His goal is to be a full time published author and is taking all the steps necessary to make that dream a reality. He hates when he hears about people who give up on their dreams.


His writing style is fast paced. When he wrote his novel Aftermath, he wanted it to feel like a television show. Joe doesn’t like boring descriptions. He finds filler scenes to be a book killer and makes sure that every chapter has an immediate purpose or a purpose later on.