Song of the Blackbird by DB Michaels Book Tour and Giveaway 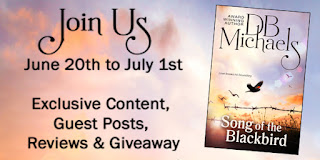 Title: Song of the Blackbird


Healing must start from within…


Desperate to reconnect with her half-brother, Emma Edwards takes her new medical training and secures a doctor’s job at the prison where he’s serving a sentence. But what she finds there is worse than she ever imagined…tough rules and even tougher men, gangs powered by drug money and corruption. Emma must find a way to keep her brother alive until he’s freed even if that means lying to the one man she should be able to trust…


Warden Maxim Chambers doesn’t believe a woman should be working in a penitentiary, especially one like Emma – a woman even a hardened man like him can’t get off his mind. He’s spent too many years building walls around his heart to let himself care about anyone. Yet when Emma is almost hurt in a prison assault, Maxim can’t deny his feelings for her. But what is the connection between Emma and the prisoner named Sam?


And accept your past.


When secrets are revealed, danger and death run through the prison. Only the truth can save Emma and Maxim…if it’s not too late.


Song of the Blackbird immerses you in a whole new world – a gritty, violent world where things you have always believed turn out not to be true. It is a compelling story of sorrow and loss, of hope and second chances, and most of all, of the power of love. 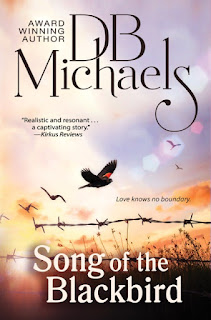 
Julien began rattling off some names. Thank goodness Sam wasn’t one of them. At least not this time, but had he been ill before? They’d always been close. Something horrible must have happened to him. Maybe he’d been beaten up and lay hurt somewhere all these months. But then Emma remembered the 308-35U. Surely if he was hurt, they wouldn’t have assigned him to a dorm?


One of the side doors to the conference room opened and several inmate workers lifting large boxes entered. One carried two huge boxes. His face was partially obscured but when he turned, her heart almost stopped. That uplifted nose, the frizzy hair, the lanky build. She squeezed her eyes shut and snapped them open again, sure her mind was playing tricks on her. But no. There he was. He turned and suddenly caught her eye. His whole body stiffened. That was it, a momentary tenseness. Nothing else. No smile, no spark of recognition. He put the boxes on the cart and followed the group of inmates out the door.


She rushed to the door, registering Chambers’s and Kaye’s identical expressions of disapproval. But what did it matter? She’d seen Sam. Her darling, beloved Sam. She flung the door open. Where the heck were they? They couldn’t have gone far. She darted down the corridor, turned left, and caught a glimpse of blue going around the next corner. She ran after them. There they were, exiting the building farther down the hall.


Emma rushed outside. The four inmate workers stood in a single line near the locked gate she’d entered with Julien awhile back. Their supervisor opened the gate with his set of keys. They were at least fifty yards away but Emma had no problem identifying Sam. His gait was the same. The usual swing to the arms and the mild dragging of his left foot. Courtesy of his cursed father who’d started this nightmare. Sam never turned around as the group disappeared from sight. Either he was mad at her or maybe he’d lost his memory? Had he had a concussion from some head trauma? He had to know her. There must be a reason for him to ignore her like that.


Emma’s heart soared. She put her hand to her mouth and prayed she still remembered. “On-ke-kaaangh. On-ke-kaaangh.”


It didn’t come out as polished as when they’d practiced it long ago camping in the woods but it was enough. Dear God, it was enough. Tears rushed behind her eyes as the familiar birdcall echoed back to her. She swallowed several times and wiped the wetness from her cheeks. She’d found her brother at last.


DB Michaels is a life-long reader who fell in love with the field of medicine during college. Double boarded in internal medicine and emergency medicine, she enjoys using her skills to help those in need. Working as a doctor in the prison system inspired her to write Song of the Blackbird, the first installment in her Albatross Prison Series. Though the book is entirely fictional, it illustrates the power of love, hope, and second chances.


DB’s first passion has always been books and she is happiest when she is absorbed in a great novel or writing. When she has time off, she likes to watch old movies, dally in the sun, and spend time with her family.