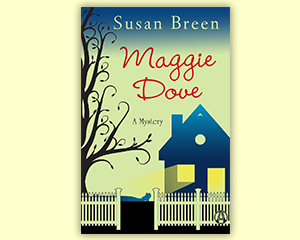 MAGGIE DOVE by Susan Breen
Susan Breen introduces a charming new series heroine in this poignant and absorbing cozy mystery with a bite. Maggie Dove thinks everyone in her small Westchester County community knows everyone else’s secrets. Then murder comes to town.
When Sunday School teacher Maggie Dove finds her hateful next-door neighbor Marcus Bender lying dead under her beloved oak tree — the one he demanded she cut down — she figures the man dropped dead of a mean heart. But Marcus was murdered, and the prime suspect is a young man Maggie loves like a son. Peter Nelson was the worst of Maggie’s Sunday School students; he was also her late daughter’s fiancé, and he’s been a devoted friend to Maggie in the years since her daughter’s death.
Maggie can’t lose Peter, too. So she sets out to find the real murderer. To do that, she must move past the grief that has immobilized her all these years. She must probe the hidden corners of her little village on the Hudson River. And, when another death strikes even closer to home, Maggie must find the courage to defend the people and the town she loves — even if it kills her.

My review;
Author  Susan Breen has started a new mystery series about a Sunday School teacher named "Maggie Dove".  Maggie has not had an easy life. Her daughter was supposed to get married to a man named Peter Nelson but she died before she could. Peter has always been a very good friend to her. Now he is in trouble and she has made up her mind to help him. Maggie has a horrible neighbor named Marcus Bender who has been found dead by her in her yard. He was always mean and rotten. She thinks he died of a heart attack but finds out that he was killed. Now it looks like Peter is one of the people that they think killed him. Maggie has her work cut out for her. It is going to be very dangerous for her, ever more so when another person is found dead. Who is behind these murders? I cannot wait for another book by this author.  I give this book a 5/5. I was given this book for a review by Chatterbox, House Party Reviews and all opinions are mine.
Posted by 3 Partners in Shopping at 11:19 PM