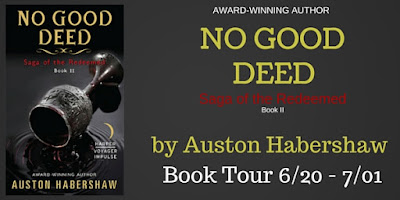 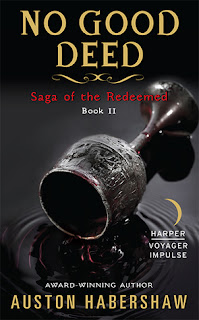 Cursed with a magic ring that forbids skullduggery, Tyvian Reldamar’s life of crime is sadly behind him. Now reduced to fencing moldy relics and wheedling favors from petty nobility, he’s pretty sure his life can’t get any worse.

That is until he hears that his old nemesis, Myreon Alafarr, has been framed for a crime she didn’t commit and turned to stone in a penitentiary garden. Somebody is trying to get his attention, and that somebody is playing a very high-stakes game that will draw Tyvian and his friends back to the city of his birth and right under the noses of the Defenders he’s been dodging for so long. And that isn’t even the worst part. The worst part is that the person pulling all the strings is none other than the most powerful sorceress in the West: Lyrelle Reldamar.

Auston Habershaw is a science fiction and fantasy writer and author of The Saga of the Redeemed (part one to be released by Harper Voyager in February 2015). You can find links to his stuff through Amazon or Goodreads (see the links to your right!). He got second place in the Writers of the Future Contest in the first quarter of 2014 (Volume 31), so he presumably has some idea of what he’s doing (though not the *best* idea, obviously). He’s also an English professor, a pretty good storyteller, and a big time geek. This blog is for him to discuss and explore some of the crazy ideas that are usually kicking around in his head, throw out some of his homemade RPGs for people to use or see, advertise his budding writing career, and see just what this whole ‘blog’ thing is about. Enjoy!