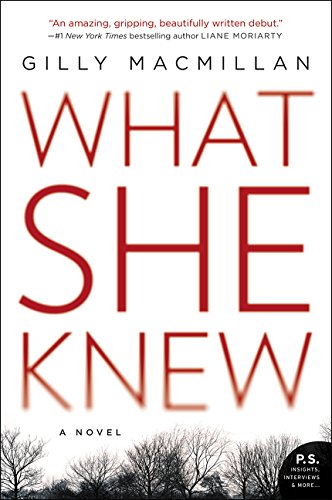 In her enthralling debut, Gilly Macmillan explores a mother’s search for her missing son, weaving a taut psychological thriller as gripping and skillful as The Girl on the Train and The Guilty One.
In a heartbeat, everything changes…
Rachel Jenner is walking in a Bristol park with her eight-year-old son, Ben, when he asks if he can run ahead. It’s an ordinary request on an ordinary Sunday afternoon, and Rachel has no reason to worry—until Ben vanishes.
Police are called, search parties go out, and Rachel, already insecure after her recent divorce, feels herself coming undone. As hours and then days pass without a sign of Ben, everyone who knew him is called into question, from Rachel’s newly married ex-husband to her mother-of-the-year sister. Inevitably, media attention focuses on Rachel too, and the public’s attitude toward her begins to shift from sympathy to suspicion.
As she desperately pieces together the threadbare clues, Rachel realizes that nothing is quite as she imagined it to be, not even her own judgment. And the greatest dangers may lie not in the anonymous strangers of every parent’s nightmares, but behind the familiar smiles of those she trusts the most.
Where is Ben? The clock is ticking...

“What an amazing, gripping, beautifully written debut. WHAT SHE KNEW kept me up late into the night (and scared the life out of me).”


“Tightly focused and fast-paced. You won’t rest until you really know what happened.”

— Lisa Ballantyne, author of The Guilty One


“Every parent’s nightmare, handled with intelligence and sensitivity, the novel is also deceptively clever. I found myself racing through to find out what happened.”


“This accomplished, intelligent debut should come with a warning-it’s completely addictive. A nail-biting, sleep-depriving, brilliant read.”

— Saskia Sarginson, author of The Twins


“Heart-in-the-mouth excitement from the start of this electrifyingly good debut…an absolute firecracker of a thriller that convinces and captivates from the word go. A must read.”


“One of the brightest debuts I have read this year - a visceral, emotionally charged story….heart-wrenchingly well told and expertly constructed, this deserves to stay on the bestseller list until Christmas”

Gilly Macmillan grew up in Swindon, Wiltshire and also lived in Northern California in her late teens. She studied History of Art at Bristol University and then at the Courtauld Institute of Art in London. She worked at The Burlington Magazine and the Hayward Gallery before starting a family. Since then she’s worked as a part-time lecturer in A Level Photography and a full-time mum.

Don't Miss Your Chance to Win a Copy of What She Knew:

This is a giveaway hosted by Partners In Crime Virtual Book Tours for Gilly Macmillan & William Morrow Books. There will be 5 US winners of 1 copy of What She Knew by Gilly Macmillan. The giveaway begins on December 1st, 2015 and runs through January 3rd, 2016. For US residents only.


"What She Knew" by author Gilly Macmillan will keep you glued to this book until you finish it. Rachel Jenner's son Ben is missing and he is only eight. They were at the park and within a short time away from her he has disappeared. The police and others search but after days they find nothing. The horrible thing is that people start to think that she has done something to Ben. Who will she be able to ask for help? Where can she turn when everyone is looking very strangely at her? This is a very important book that anyone who watches children should read. Children can disappear in a matter of minutes and we should all be aware of what can happen. I give this book a 5/5. I was given this book by Partners in Crime Book Tours and all opinions are mine.