In Time For You by Chris Karlsen Book Blast and Giveaway

In Time for You 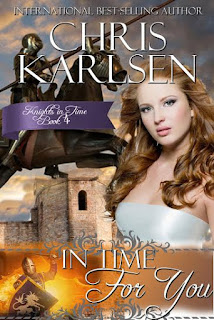 
While horseback riding in the English countryside, sisters, Electra and Emily Crippen find themselves trapped in a tear in time. Thrown back to 1357 England and caught by a local noble, they are in a place that is home but as frightening and unfamiliar as an alien world would be. With no idea how the tear in time came about, the one thing they do know is: they must stay together and stay near to where the event took place in hopes of discovering the way back to their modern life. That certain need to stay together is the first certainty taken from them when one sister is forced to remain in England and one is sent miles away to Wales by royal order.

There is one other hope for help the sisters don’t know exists. It’s Electra’s lover, Roger Marchand. A time traveler himself, he never told her of his past. When he realizes what has happened to the sisters, he enlists the help of a scientist friend to help him open the suspected passageway through time. Any effort to save Electra and Emily will likely cost him his life. This was the time Roger came from, a time when his country, France, was at war with England. If he is discovered on English soil while searching for the sisters, he will either be killed or taken prisoner of war. Any risk is worth saving the life of the woman he loves.


They walked at a fast pace for fifteen minutes. They came to where a service road built during World War II intersected with the Old Roman Road. Instead mature oaks and alder dotted what should've been the single-lane service road. Gone too was the old sign indicating the direction of the wartime airfield abandoned in 1946.


"I'm afraid, El. Nothing is what or where it should be. Things are the same but different."


"I'm afraid too. I don't understand any of this. Like you said, it's all the same in the main, but the details are all wrong. It's as though we're part of an artist's rendition of this place, but he erased Roger and the horses, and the picnic part. Instead he drew in foliage and kept us."


Emily tried her cell phone again with no luck. "Maybe we should wait here. I'm certain Roger will come for us. He's probably already headed this way. Don't you think?"


Electra didn't want to tell her what she feared. She had no idea what was happening to them or what they needed to do, but in her heart, she feared if he was coming, he'd be there by now.


"No, I don't think he's on the way," Electra said, truthfully. Emily would figure it out soon enough. "I don't see how staying in one place is better than keeping on toward the house."


"And if your imaginary artist erased the house?"


"Then we'll work out our next move."


They continued on to where Esme and Stephen's house stood or should've stood. Their cottage dated back to Tudor times as did the stable and other outbuildings. They'd survived hellacious storms, German bombs, and natural decay for 500 years.


The sisters froze at the sight. None of the buildings were there, only short stone fences sectioning off various sheep pastures that occupied the land. 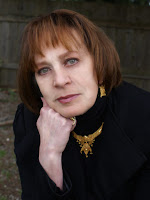 
I was born and raised in Chicago. My father was a history professor and my mother was, and is, a voracious reader. I grew up with a love of history and books.


My parents also love traveling, a passion they passed onto me. I wanted to see the places I read about, see the land and monuments from the time periods that fascinated me. I’ve had the good fortune to travel extensively throughout Europe, the Near East, and North Africa.


I am a retired police detective. I spent twenty-five years in law enforcement with two different agencies. My desire to write came in my early teens. After I retired, I decided to pursue that dream. I write three different series. My paranormal romance series is called, Knights in Time. My romantic thriller series is Dangerous Waters. The newest is The Bloodstone Series. Each series has a different setting and some cross time periods, which I find fun to write.


I currently live in the Pacific Northwest with my husband and five wild and crazy rescue dogs.


Chris will be awarding a $15 Amazon or B/N GC to a randomly drawn winner via rafflecopter during the tour,