At the height of President Jennifer Bradley’s inaugural parade, a bomb detonates, followed by shots from a sniper’s rifle. She survives despite the numerous casualties including the Chief White House photographer. The authorities apprehend the only surviving suspect, but before they can interrogate him, he dies mysteriously while recovering in the hospital.


In an effort to hunt down those responsible and prevent future assassination attempts, Special Agent Wade Masterson of the Secret Service recruits photojournalist Xandra Carrick for a dual-role position as the President’s Photographer and clandestine assistant operative.


Xandra’s uncanny gift of second-sight through the lens of a camera thrusts her straight into the center of a deadly terrorist plot that runs far deeper than anyone in the intelligence community ever imagined.


But she may already be too late.


In a tale of vengeance, honor and sacrifice, Xandra must draw upon all she has to stop an insidious plot which threatens to bring the country to its knees with a biological weapon that will decimate the nation’s population. 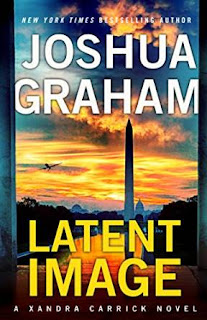 
IN THE CROSSHAIRS OF THE SNIPER’S SCOPE the target shifted in and out of view. The motorcade drifted down Pennsylvania Avenue, Secret Service agents flanking its side, while Vice President Phillip Marsden and his wife Gwen waved to the cheering crowd on either side of the street behind the cold 16-gauge steel tubing of the barricades.


Neither of them was the target.


The sniper swung his scope back to the west, where the glare of the sun blinded him momentarily. He grunted, blinked and reestablished his view. The cold January wind bit at his bare fingers as he felt the trigger and anticipated the diversionary strike his partner would unleash half a block away.


Tuning out the trumpet strains of marching bands, the steady drum beats, and the crowd’s applause, he initiated a silent countdown just as Jennifer Bradley, the nation’s newly re-elected president strode past the designated spot.

CBS NEWS described DARKROOM as a book with "action, political intrigue and well-rounded characters...a novel that thriller fans will devour."

PUBLISHERS WEEKLY described BEYOND JUSTICE as: "A riveting legal thriller...breaking new ground with a vengeance...demonically entertaining and surprisingly inspiring."

Suspense Magazine listed BEYOND JUSTICE in its BEST OF 2010, alongside titles by Scott Turrow, Ted Dekker, Steven James and Brad Thor.

Many of Graham's readers blame him for sleepless nights, arriving to work late, neglected dishes and family members, and not allowing them to put the book down.

Josh grew up in Brooklyn, NY where he lived for the better part of 30 years. He holds a Bachelor and Master's Degree and went on to earn his doctorate from Johns Hopkins University. During his time in Maryland, he taught as a professor at Shepherd College (WV), Western Maryland College, and Columbia Union College (MD).

Today he lives with his beautiful wife and children on the West Coast.


Sign up for exclusive updates, interviews, and to be entered for giveaways by subscribing to Josh's newsletter: www.joshua-graham.com/GIA