His Dream Role by Shannyn Schroeder Book Blitz and Giveaway 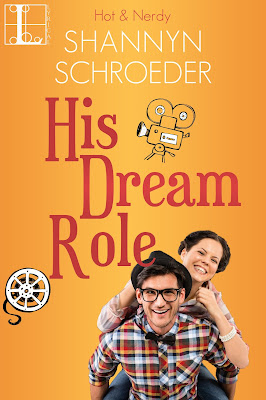 Free Mitchell loves the theater. In his dreams he’s the one taking the spotlight. But so far he’s played against character by following in his father’s footsteps as an investment banker. When he’s masquerading as Dr. Who or Sherlock Holmes to help his brother, he feels he can escape his shy, dorky persona. But nothing’s prepared him to play boyfriend to a gorgeous girl like Samantha Wolf.

Samantha isn’t quite sure what to think of Free. He’s cute, sweet, and quirky, but his outlandish costumes make him seem crazy. However, it turns out Sam has a soft spot for theater nerds. And the more time they spend together, the more their steamy romance begins to take center stage. Only problem is, there doesn’t seem to be a script. And it’s anyone’s guess how this one will end.


Samantha found herself standing in the coffee shop waiting for whatever his name was. How ridiculous was it that she liked a guy but didn’t even know his name? She didn’t wait for guys; it wasn’t her style. But she had a feeling he’d be coming to get his usual coffee before rushing out to rehearsal.


Interesting that he drank boring old black coffee. He was such a colorful, unique guy in his costumes that it seemed he should have a more complicated coffee order.


The door opened and in he came, carrying a plastic bag. He wore a fedora and a leather jacket instead of his longer overcoat. He smiled a cocky grin and then she realized that he was Indiana Jones.


He tipped his hat. “I’m like a bad penny. I always turn up.” He stepped toward the counter to order.


“Wait.” She laid a hand on his arm and then realized that was more personal than they’d been and snatched her hand back. “We’ve met and talked a couple of times now, but I still don’t know your real name.”


He extended a hand to shake. “Humphrey, but my friends call me Free.”


“Free,” she repeated with a nod and shook his hand.


The name was unusual, but suited him. Old-fashioned, yet the nickname was fresh. “Ready for coffee?”


She allowed him to order for her. She liked that he paid attention to her order. Of course he waved off her offer to pay for hers. They sat at a table and he slid the plastic bag over to her. “What’s this?”


Inside the bag, she found five copies of The Little Engine That Could. Her throat tightened.


“You said there were kids, as in more than one, but I didn’t know how many. I figured five would be a good number to start with.”


“You bought me books?” The words barely squeezed out.


“What’s the name of the shelter you work at?”


The question had her looking up sharply. “Why?”


“My mother is always looking for a cause and I told her about you needing books. When I talked to her yesterday, she was ready to start working on a book drive. But I didn’t know the name of your shelter, so I couldn’t tell her.”


“Is it a secret or something?”


“Not really.” She hesitated. “The thing is, the women come to us for shelter and safety. So while the name isn’t a secret, we don’t advertise where to find us.”


His face filled with confusion. “Then how do the women find you?”


“You don’t have to tell me anything. I can give you my mom’s number and you can explain to her.”


“Good name.” He drank another sip. “I have to get going to rehearsal.”


“Before you go, can you tell me why you’re dressed in a different costume every time I see you? This is obviously not A Christmas Carol.”


He pressed his lips together. “Last summer, my brother was warned by his doctor to lose weight or he’d end up having a stroke. He was embarrassed to go to a gym because he felt like everyone stared. I volunteered to go with him and dress up in costume to draw attention away from him.” He lifted a shoulder as if it was no big deal.


Sam’s heart gave a little lurch. She’d known after that first chance meeting that he was a sweet guy, albeit a little weird. This confirmed it. “That’s really cool of you.”

Books in the series (click on image for Goodreads link):

Shannyn Schroeder is the author of the O’Leary series, contemporary romances centered around a large Irish-American family in Chicago and the Hot & Nerdy series about 3 nerdy friends finding love. When she’s not wrangling her three kids or writing, she watches a ton of TV and loves to bake cookies.

GIVEAWAY:
a Rafflecopter giveaway
Posted by 3 Partners in Shopping at 12:20 AM