A surprise visitor shows up at Sarah and Michael's lake house in Indiana. His story is one that intrigues and frightens Sarah. What frightens her more is the growing attraction she begins to feel for this new vampire.


Can she choose between Michael and a vampire she barely knows? Or will that choice be taken from her? 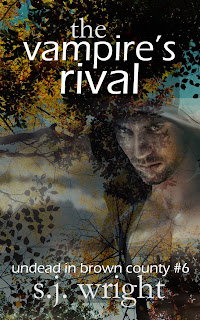 
“He’s been killing humans. Four since this late this morning, as far as we can tell,” Kate told me. I could nearly detect a note of panic in her voice, but I knew better than to address it.


“Does anyone know where he is right now?”


“No. One of the members of the Council was interviewed by Homeland Security and positively identified Michael in a security video.”


“They caught him on camera?”


“Yeah. A convenience store in Chicago. He killed the cashier and one bystander there, then an hour later got a taxi driver and his passenger. It’s not like him to be so reckless, Alex. You know that. Especially now that he’s king,” she said.


Telling Sarah about that conversation wasn’t easy. It reopened her emotional wounds. But I couldn’t see how hiding it from her would help anyone. We climbed back into her truck. I drove this time.


She was too quiet. I wasn’t sure if talking would help or not. Maybe she needed to process everything that had happened on her own. I didn’t really know what to say anyway. It was a nightmare for her and I didn’t want to rehash everything and end up making it all worse.


“Alex, where should I go?” she asked. Her voice reminded me of a little girl’s.


“I don’t know. Is there anywhere you would be safe?”


We both knew the answer. She would not be safe until Michael was locked up again. And the only place that could happen would be…


Getting in touch with the lumber company wasn’t as difficult as we thought. They had bought the property after the explosion and were ready to have someone take it off their hands. The profit in the lumber wasn’t as good as they imagined it would be.


So Sarah wrote them a check from the joint account she’d opened with Michael and signed the deed the next day. She had tears in her eyes when they gave her the keys to the front gate. Whether they were tears of sadness or nostalgia, I wasn’t sure. Maybe it was a combination of the two.


The problem was that Sarah had been turned outside of the farm property. I had changed her into a vampire at the cabin. So she couldn’t go onto the property herself until she was invited, just like other vampires. It was different with me. I had been turned at the farm by Michael and Victoria.


So Sarah called and requested that her sister come out there to let her onto her own property. Sarah’s friend from school, Kara, let us borrow her family’s large camping trailer and we towed it out the farm entrance with Sarah’s truck.


It didn’t take Kate very long at all to get back to Indiana.


She pulled up in a fiery red Camaro convertible. She wasn’t alone. Her mentor from the clinic in Brazil was in the passenger seat. Marco. I’d met him once before and had been impressed with his knowledge.


Before Kate even got out of the car, she was cussing. “I can’t believe I have to fucking do this.”


Kate gave her a withering look and shook her head. “I’m sorry. Hi. It’s been a long couple of months hunting that bastard Mahdi. I’ve followed him through seven different states and two Caribbean islands.”


“No luck catching him, though?” I asked.


“Exactly, Alex,” she retorted with spirit. “No luck on that score, Mr. Obvious. Trust me. Once I get this guy, I will lose this attitude I’ve got going on right now.”


Sarah walked over to the gate and Kate followed. Kate put the key in the lock and pulled the chain off the aluminum frame. She sighed deeply and stood inside the property line.


“Sarah, you are invited,” Kate said.


And that was all we needed Kate for, but it didn’t take a genius to see that her sister’s safety meant a great deal to her. “I think I’ll stick around town for a while. Marco, you good with that?”


He nodded and then punched up a few numbers on his cell phone. “I’ll get a reservation somewhere.”


Sarah began walking up the hill towards the spot where the house had stood for so many decades. The house and barn had both been completely demolished in the explosion, but a few things had remained.


“The stones are still there,” Kate said as we followed Sarah up the hill. “The cowshed is partially burnt, but still standing. Alex, how can coming back here help m sister? This doesn’t make much sense.”


I glanced over at her. Her long dark curls were pulled up into a ponytail and she was wearing a pair of tight jeans and a snug sweater. I probably shouldn’t have looked at all.


“Kate, if Michael has done what they are accusing him of, the Council will catch him. And when they do, where do you think they will send him?”


She laughed without a hint of humor, “Not Arizona, I hope. That place is a wreck.”


“It will be here. But he can’t get in without your invitation. We need Michael to be put in here and then Sarah can leave and be safe. Do you understand? Their relationship is over. She has to move on with her life.”


“But they don’t want Michael locked up.” She looked at me with those dark eyes and I didn’t want to turn away.


“They want him dead,” she finished quietly.


S.J. Wright first began writing stories when she was twelve years old. She has been a cashier, a receptionist, a factory worker and has served a multitude of other roles over the years. Her favorite role has been that of a mother to her two sons.


The Undead in Brown County series takes place in Brown County, Indiana. She began writing the series in October of 2010. In February of 2011, she published her first novel The Vampire's Warden as an ebook on Amazon and Barnes & Noble. Since then, she has released five more books in the series.