The Midnight Society by Rhonda Sermon Book Blitz and Giveaway 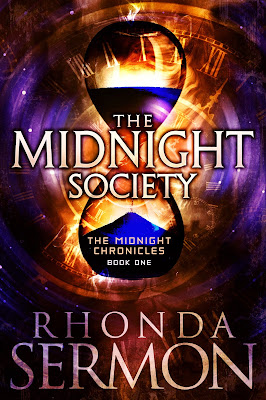 Witness protection has a protocol for dealing with every situation—except magic.
Fifteen-year-old Cate's life has been monitored since her new identity was created five years ago. She's spent countless hours learning how to deal with potential threats and dangerous situations. None of which is any use when everyone around her is suddenly frozen like statues at the bus stop.
As Cate attempts to make sense of the frightening scene, a mysterious group of teenagers appear out of thin air. They are intrigued she’s not affected, but focus on completing their deadly mission, using baffling powers before they vanish again.
When the group seeks her out the next day, Cate is drawn into a world filled with sorcery and time travel. After she accidentally brings a cheerleader back from the dead, her incredible powers are revealed. Cate is shocked to discover she has a pivotal role to play in a centuries-old battle between two mortal enemies which threatens to destroy her entire world.
With the distinction between good and evil blurred, she’s faced with the excruciating choice of which side to join. Cate can save her family or protect thousands of people from death. She can't do both. Will she risk destroying innocent lives to save the ones she loves?
The Midnight Society is the first book in The Midnight Chronicles series of young adult urban fantasy novels. If you like original butt-kicking heroines, fast-paced urban fantasy action, and unpredictable time travel twists, then you’ll love Rhonda Sermon’s refreshing, entertaining series starter.
The Midnight Society was originally released as Timesurfers. This book has a new name, new cover and additional content.

Advance Praise:
"Sermon has done a brilliant job. All her characters are realistic and breathe a certain kind of wisdom - Marne Smith.

"WOW! This novel took me on an amazing ride... I recommend it to anyone looking for a new fun read" - SandraTheBookWorm.

"A unique, fast paced and compelling read with a very quirky and cool main character that has kick ass rainbow coloured hair" – MollieTheReader


Eve threw her arms around Cate with so much force, they collided with a group of students from their school standing at the bus stop. “I rushed to find you the second I heard. Are you okay?”


Cate disentangled herself from her friend’s overzealous bear hug. “What are you talking about?”


The mobile phones from the nearby students beeped in quick succession and they looked from their glowing screens to Cate.


Eve’s eye’s widened, and she snatched Cate’s phone from her hand just as it beeped. “Before you read that text, remember I may be your only friend, but I’m an awesome one. It’s not like you need a boyfriend. You’ve got me.”


Unfortunately, that wasn’t true. Cate’s witness protection rules specifically stated she needed a boyfriend. Her breath, mixed with the freezing air, created smoke as she exhaled. “Let me see the text.”


“Prepare yourself.” Her friend squeezed her eyes shut and held the phone out for Cate to read the new text message.

About the Author
Rhonda Sermon lives in the mostly sunny Perth, Western Australia with her husband and two children. Her debut young adult urban fantasy novel Timesurfers was a finalist in the Young Adult category and overall runner up in the The Strongest Start 2012 Contest hosted by TheNextBigWriter.com. On the good days, she adores writing, on the challenging days, it's still awesome.Her two ragdoll cats can often be found helpfully walking over her keyboard, chasing her mouse or generally complaining loudly about the lack of priority their needs are being given.She's a big Harry Potter fan, loves everything the talented Cassie Clare writes and her fav Aussie author is Jessica Shirvington. Her 11 and 13 year old children read ALL the time so she is always on the lookout for new and exciting books.
Author Links: