Murder at Morningside by Sandra Bretting Book Tour and Giveaway 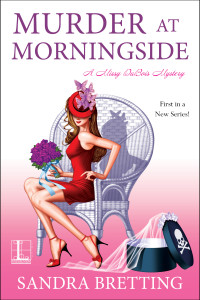 Hat designer Missy DuBois opened her shop, Crowning Glory, along Louisiana’s Great River Road to cater to the sophisticated Southern bride. But bless her heart, who knew creating stylish wedding veils would lead to murder? Hired to craft a veil for a socialite getting married at Morningside Plantation means Missy can bask in the height of antebellum atmosphere. But when the bride is found dead in a women’s bathroom, Missy the milliner finds herself entangled in one unfashionable murder.

With the list of suspects thicker than the sweltering Louisiana heat, including a gaggle of bridesmaids shedding nary a tear and a family with no shortage of enemies, it seems anyone at the mansion may have done away with the bride-to-be. While Missy has Southern charm to spare, she’s going to need more than manners and a manicure to put a hat pin on this murderous affair . . .

Sandra Bretting has served as a freelance feature writer for the Houston Chronicle since moving to Texas in 1996. She received a journalism degree from the University of Missouri School of Journalism, and spent her early career in healthcare public relations at medical centers throughout Southern California. Other publications for which she’s written include the Los Angeles Times and Woman’s Day. Readers can visit her website at SandraBretting.com.