Passion of a Scottish Warrior 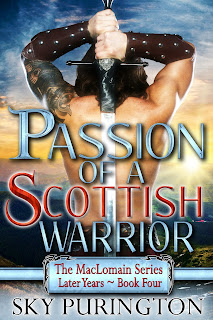 
Determined to protect Jackie from evil, Darach Hamilton flees MacLomain Castle without telling anyone his destination. As foretold by Celtic Goddess Brigit, that should have made the enemy pursue him. But nothing is as it seems. When he learns the dark demi-god went after Jackie instead, he races to her side only to discover something unexpected. Things have changed. There might be hope for them. Maybe he can finally be with her. After all, he’s been dreaming about her for years. The only problem? He already pushed her into another man’s arms.


Over a month has passed since Jackie traveled back in time from modern day New Hampshire to medieval Scotland. Since then, it’s been a non-stop adventure. Now she’s in ninth-century Scandinavia with Heidrek, a Viking set to inherit the throne. A man that Darach is determined she be with despite the unforgettable kiss they shared. Then there’s the newfound Claddagh ring on her finger. It is foretold that its stone can only be ignited by the love of a MacLomain. Darach is by birth, the only remaining MacLomain not taken. Yet despite the power the ring’s glow could harness, she wants nothing to do with it. Not in light of her terrible secret. One she prays will keep any man from loving her because it will mean their ultimate ruin.


Many revelations come to light when Jackie, Darach, and Heidrek travel through time to keep the future King, wee Robert the Bruce safe. Determined to spare them heartbreak, Jackie refuses both men. Yet one of them ends up invoking unavoidable passion. A timeless draw. One she tries to fight. But some things are meant to be and Fate has a plan for them all. Epic love. Ultimate war. Inescapable death. Twists nobody saw coming. An ending that will either see Scotland through to what it is today or rewrite history altogether.


Find out how everything unfolds in Passion of a Scottish Warrior, the final installment in the MacLomain Series: Later Years. 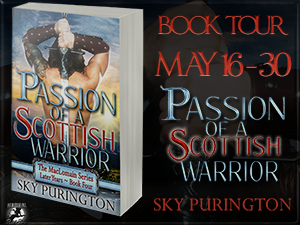 
Jackie shook her head as she looked into Darach’s eyes. Being in his arms was the last place she needed to be. Yet the crowd pushed them closer and the man she had been dancing with vanished. She swallowed hard when his arm wrapped around her waist and twirled her away from a couple that stumbled by them laughing.


The crowd was wild.


And she was tight against Darach.


Not a good place to be. Or was it? She swallowed again and kept her arms down because if she lifted them, what would she touch? The sides of his muscled torso…his strong forearms…his wide shoulders?


“You dinnae need to keep shaking your head no,” he murmured. “I willnae…”


When he trailed off, she realized that he had no idea what he would or would not do. Besides the arm that he wrapped around her waist, his other hand didn’t touch her at all.


His head was bent near hers, his lips so close to her ear that she could feel his hot breath down the side of her neck. Chills and heat raced over her simultaneously as she tried to sift through her feelings.


Push away. Touch his chest and push away.


But again, if she touched him…what then? Would pulling away still be an option?


The pipes seemed to trill louder, and the fire in the center of the room sparked higher as the celebrations became a boisterous background to the quiet she suddenly felt on the inside. A strange silence made up of her heartbeat and the indentation where his neck met his collarbone. She inhaled deeply and turned her face inward, chasing his scent and heat.


She barely felt the slight touch of his hand on the back of her head as she nuzzled in, desperate to get closer to…something. It almost felt like a memory. One just out of reach. Lips open, she flicked her tongue, eager to sample. Eager to capture his scent. Curious what it tasted like.


Only when he whispered, “Bloody hell, lass,” did her eyes snap open and she realized what she was doing. By that time, it was too late. He tightened his hold, dug his hand into her hair, tilted back her head and met her eyes. Their lips were inches apart when he whispered, “What are you doing to me?”


Jackie had no idea. What was she doing to him? What was he doing to her? She’d never felt anything like it. So much. Almost too much. Yet it felt like something not entirely real. As if she recalled snippets of a dream.


His eyelids drifted down. So did hers.


Purington loves to hear from readers and can be contacted at Sky@SkyPurington.com. Interested in keeping up with Sky's latest news and releases?


A $25 gift card to winner’s choice of Amazon or Barnes and Noble.