This is my stop during the blog tour for Forever and One Week by Caroline Cairn. This blog tour is organized by Lola's Blog Tours. The blog tour runs from 25 till 29 May, view the tour schedule here.

Start reading this series now for free!
Grab your free copy of Forever Hers on amazon 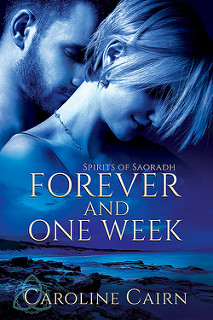 Spirit Logan despises the obedience he has to show to his humans, and prefers the enjoyable solitude of the Void. For three years, he has managed to threaten them into severing their bond, thus having his memory wiped of their existence. Except his latest human, an emotionless woman with a secret past, isn’t scared of him. Worse, she doesn’t care about his ability to make wishes come true.

Tessa, a twenty-six-year-old nursery teacher in Fort William, Scotland, doesn’t expect a sullen ghost only she can see and touch to burst through her solid defences. Both dismayed and intrigued, she offers Logan a deal he can’t refuse: to live with her in the human world for one week, at the end of which she will agree to release him.

Slowly, Tessa braves through the safety of her detachment towards people to show Logan some kindness. But the more her feelings deepen, the more Logan increases his distance… 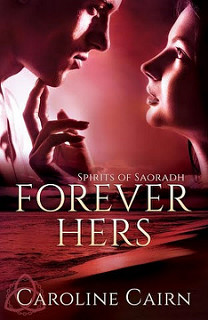 Blurb:
Feisty twenty-four-year old Holly, or Miss Greedy as her friends call her, receives a wooden cube as a gift from an enigmatic elderly lady who happens to be her mother’s new neighbour in Lossiemouth, a small Scottish fishing town. What she doesn’t expect, is for the cube to contain Blayne, a Spirit of Saoradh only she can see and touch.

Blayne is a playful, headstrong ghost with no recollection of his human past and an ability to grant Holly’s wishes whenever she calls for him — as long as said wishes don’t raise any questions from the public that is. So a shiny new car might be out of the question, but the possibility of a flat stomach, a consistently spotless house or a perfect daily hairstyle more than make up for it. Through their incessant banter, Holly and Blayne grow closer while fighting against their mutual attraction since they have no possible future together.

But when the painful reality of Blayne’s existence is revealed, Holly will realize that it’s not always the girl who needs to be saved.

You can find Forever Hers on Goodreads

You can grab your free copy of Forever Hers here:
- Amazon