This Ring by Jacqueline Paige 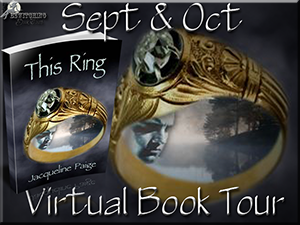 
Attempting to pick up the pieces of her life and heart, Emma flees to an isolated cottage on a lake. Not knowing what to do or where to start, she needs time to decide on her new life.


An invisibility curse has given Bryce forty years to reflect on past mistakes. The arrival of an intriguing woman brings him someone to watch, who just might be the first to see him in decades.


Together they may find their chance to live again…

The most fascinating thing began to happen as the sun started to light the world.  It looked as if fog, or mist she supposed, was coming off the ground and shore, moving out over the water.  She sat there in awe, never having seen such a thing in her life.  It was both eerie and breathtaking all at the same time.  For a second she pondered on whether she should run back inside and get her phone to record it—but not knowing how long it would last she sat right where she was.


In no time the lake was covered in a blanket of mist that hovered and swirled just over the water’s surface.  Emma couldn’t take her eyes off the bright white layer over the water.  Birds were oblivious to it being there as some flew from the trees to land among the haze—only to vanish from her sight.  There was something else among the white vapor; she stood to get a better look in the low light, trying to decide what it could be.


As her eyes focused through the misty dawn glow she dropped the cup to the sand beside her shoes.  It looked like a man; only he wasn’t quite solid looking.  Which, she knew was crazy.  Men didn’t walk out of the water.  She thought maybe he was on a boat that the fog hid, until it swirled clear around him and there was nothing but water beneath his feet. Snapping her mouth shut, she squinted and watched as he came towards the shore.  Having hallucinated more than enough, she turned abruptly and walked back towards the little cottage.  Clearly she still needed a lot more sleep.


Jacqueline Paige lives in Ontario in a small town that’s part of the popular Georgian Triangle area. No one has ever heard of Stayner, so she usually tells people she lives “near Collingwood” and no, she doesn’t ski at Blue Mountain or at all, in fact she’s not even fond of snow.


She began her writing career in 2006 and since her first published works in 2009 she hasn’t stopped. Jacqueline describes her writing as “all things paranormal”, which she has proven is her niche with stories of witches, ghosts, physics and shifters now on the shelves.


When Jacqueline isn’t working at her ‘reality job’ or lost in her writing she spends time with her five children, most of whom are finally able to look after her instead of the other way around. Together they do random road trips, that usually end up with them lost, shopping trips where they push every button in the toy aisle, hiking when there’s enough time to escape and bizarre things like creating new daring recipes in the kitchen. She’s a grandmother to four (so far) and looks forward to corrupting many more in the years to come.

Schedule This Ring by Jacqueline Paige

October 11 Interview and review
Hooked In a Book
http://hookedinabook.blogspot.com/

October 18 Spotlight and review
Ramblings of a Book Lunatic
http://booklunaticramblings.blogspot.com