Sign of the Throne by Melissa Eskue Ousley Bookend Tour 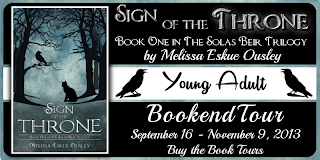 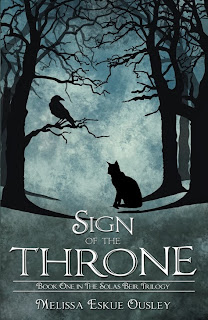 
Abby Brown has strange dreams. She is haunted by visions of shadowy, wraith-like monsters, an ivory castle, a white doe, a mysterious woman, and a striking stranger. When she meets David Corbin, the doppelgänger of the handsome young man in her dreams, she realizes that her dreams, and her nightmares, come true.


Encountering the queen of Cai Terenmare, a magical parallel realm, Abby discovers that she is a Cai Aislingstraid (C’aislingaer for short). The word Cai has several meanings: soul, heart and home. Cai Aislingstraid can be translated as a soul who walks in dreams, and Abby learns that she has the ability to see the future and to connect with another person’s soul in dreams. Queen Eulalia is also a C’aislingaer and promises to teach Abby about her abilities.


In addition to being a dreamwalker, Abby discovers that she is an empath, which means she is sensitive to other people’s emotions. Being perceptive in this way can be an advantage in figuring out what motivates people or being able to sense when people are lying. At times, however, this ability can be a disadvantage. When someone is experiencing a strong emotion, Abby finds herself easily overwhelmed by the force of the connection. There is a physically debilitating effect, sapping her energy and leaving her physically and emotionally drained. As an introvert, she copes with this draining effect by seeking solitude, so she can recover from an intense negative encounter. In mastering her abilities, Abby will have to learn to shield herself from strong negative emotions and people with abrasive personalities. She will need to learn to channel her energy to influence people emotionally.


The queen also reveals more about Abby’s connection to David Corbin and the world of Cai Terenmare. David is the lost heir to the throne, destined to become the Solas Beir, a powerful ruler with extraordinary abilities, such as the ability to heal others, or move objects with his mind. Using a sacred object called the Sign of the Throne, Abby and David must combine their developing powers to heal a broken portal, enabling David to return home to claim his birthright.


If they fail, an evil lord named Tynan Tierney will be released from his desert prison in the Wasteland, and will seize the throne, bringing the kingdom to its knees, and releasing his dark army to feed on humanity.
Abby spent the next evening babysitting for Cassandra and Riordan. She putthe kids to bed and laid out her homework on the coffee table downstairs. She was immersed in her work when she realized—the house was quiet. Eerily quiet.
She was used to the familiar creaks and groans of the old house, and night ushered in the occasional chirp of a cricket or flutter of moth wings around theantique sconces lighting the room. Tonight she heard nothing—there was only dead silence. She felt a prickle at the back of her neck and realized she was shivering. The room had gone unnaturally cold, and she had the distinct sense that she was not alone.
Out of the corner of her eye, she saw a shadowy presence, someone standing still, watching her. She turned to look, but there was no one there. She felt a terrible unease twisting in her gut. Something was wrong.
Responding to her intuition, she got up and climbed the stairs to check on thechildren. Ciaran was snoring, perfectly at peace. He had wriggled out of his covers in his sleep. Abby tucked him back in.
Leaving his room, she walked down the hall to the twins’ room. The nightlight inthe hallway began blinking erratically. She entered the room and froze. Perched monkey-like on the corner of Rowan’s crib was a shadowed figure thesize of a small boy, leaning over the sleeping child. Sensing Abby, it turned its head, blood-red eyes meeting hers.
Abby gasped with horror as the creature leapt with unnatural agility from thecrib and crouched like a spider high on the wall, staring down at her. Slowly, it smiled, revealing rows of pointed narrow teeth, sharp as razors. And then…it pounced.
Abby raised her arms to shield herself, scrunched her eyes shut, and screamed. But there was nothing. She heard a low chuckle behind her and saw the creature near the door. The shadow boy laughed and ran out. Thesmoky form changed into a large black housecat before disappearing throughthe hallway wall.
Abby ran to the twins’ light switch and turned on the lights. She checked to make sure Rowan and Siobhan were unharmed, and then hurried to Ciaran’s room, flicking on lights as she ran. Ciaran was still fast asleep—her scream had not disturbed him at all.
She jerked open his closet door and found his aluminum baseball bat. Then, scooping him and the quilt up from his bed, she ran back to Rowan and Siobhan’s room. She shut the door and nestled the five year old into a make-shift bed on the floor. Sitting against the dresser next to him, she hummed, trying to reassure herself. Armed with the bat and the adrenaline coursing through her body, she waited. 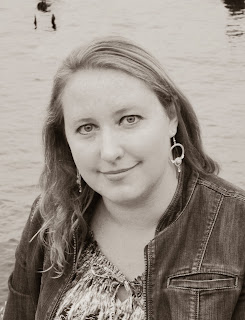 Melissa Eskue Ousley is the author of The Solas Beir Trilogy. “Sign of theThrone,” the first book of this young adult fantasy series, will be released onSeptember 14. She is currently working on the second and third novels in thetrilogy, “The Rabbit and the Raven” and “The Sower Comes.”
Melissa lives in the Pacific Northwest with her family and their Kelpie, Gryphon. When she’s not writing, Melissa can be found swimming, hiking, kayaking, scuba diving, or walking along the beach, poking dead things with a stick.
Before she became a writer, she had a number of educational jobs, ranging from a summer spent scraping roadkill off a molten desert highway to years spent conducting research with an amazing team of educators at the University of Arizona.