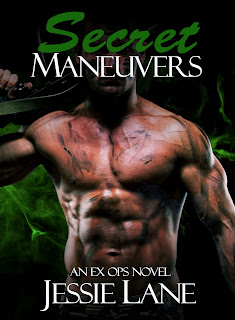 
Some mistakes from the past haunt us forever... One 'dear John' letter haunts Bobby Baker's every living moment. It’s the letter he stupidly wrote to his high school sweetheart, Belle, right after he left to join the Army. The letter that he told her that he wasn't so sure if they were ready for forever yet. But before he can let her know that the letter, and his second thoughts, are nothing but a mistake, she up and disappears from the small Georgia town they were both raised in. unless fate steps in with a second chance. Fifteen years later, Belle unknowingly walks back into Bobby's life when her job as an ATF Agent forces her to work with a group of men secretly headed by the CIA to help her track down whoever is involved in funneling black market weapons to a drug cartel in Mexico. Bobby will use this mission to try and soothe Belle's hurt feelings while proving to her that their love is still meant for forever. He'll use every dirty trick he's learned since he joined the Army to maneuver her back into his life for the long haul. But Belle's not making it easy as she keeps him at arm's length in the hopes that mistakes of her own never come to light.
Schedule of Particpating Bloggers:
Toot’s Book Reviews
Reading Between the Wines
MsRomanticReads
Book Nerds Anonymous
random jendsmit
[Insert Clever Quip Here]
Book Devotee Reviews
3 Partners in Shopping,Nana, Mommy, & Sissy, Too!
Christine Janes
RhiReading
read that
Cocktails and Books
Little Read Riding Hood
Perusing Princesses
Proserpine Craving Books
I Read Indie
Book Lovin’ Mamas
Belle’s Book Bag
Swept Away By Romance
Curse of the Bibliophile
Smardy Pants Book Blog
The Book Bellas
EBookObsessed
Fictional Candy
Riverina Romantics
Unwrapping Romance
Love Books! Book Reviews
Rather barefoot than bookless
Adria’s Romance Reviews
romancebookworm’s reviews
Autumn After Dark
Mama Kitty Reviews
book boyfriend reviews
Paulette’s papers