The Witches of Dark Root by April Aasheim Blog Tour 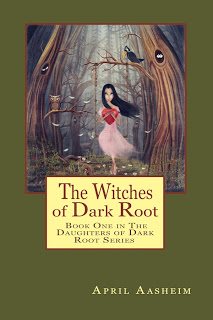 
Deep in the forests of Central Oregon is a town called Dark Root, a place shrouded in secrets, mystery, and witchcraft.


But for Maggie Maddock, Dark Root is also a prison, a place where she is forced to spend her days working in her mother’s magick shop, forfeiting any dreams of her own. So when a mysterious stranger suddenly appears and offers to take her away from it all, Maggie jumps at the chance.


Now, seven years later, a strange phone call sends Maggie back to Dark Root and she is unprepared for what awaits her: a dying town, a sick mother, a renewed sibling rivalry, and a past she had hoped to forget. Part Practical Magic, part Divine Secrets of the Ya-Ya Sisterhood, The Witches of Dark Root is a tale that seamlessly weaves the normal with the mystical, the mundane with the fantastic. Zipping in and out of time from Maggie’s childhood as an apprentice witch to current day, where Maggie struggles with her increasing powers, as well as family obligations, The Witches of Dark Root is a book rich in both fantasy and heart which will leave readers believing in magic.


“Maggie, wake up.” Merry jostled her sister, rousing her from her nap on the couch.


Maggie sat up, rubbed her eyes, and looked around. For a moment she forgot that she was in the living room of Harvest Home.


A loud chime coming from the grandfather clock confirmed that that it was midnight, time for the ritual. Maggie felt the chill from the open door and looked around for her sweater.


“We aren’t supposed to wear anything other than our robes tonight,” Merry cautioned, but helped Maggie into the sweater, anyways.


“Where’s Eve?” Maggie asked. If she was going to have to wander the woods in the middle of the night for some crazy ritual, then Eve better be up, too. Maggie saw her standing by the door, jumping up and down, not tired at all.


Miss Sasha and six of her friends emerged from the dining room, talking excitedly and exchanging knowing glances.


“You girls ready?” Miss Sasha asked. This was to be their first grown up moon chant and Miss Sasha could hardly contain herself. She noticed the sweater Maggie wore over her long blue robe and frowned but didn’t mention it.


Merry, Maggie, Eve, and Ruth Anne followed their mother and her friends into the night.


It was cold and the sisters shivered as they wound their way along an old dirt road shrouded by trees to a circular clearing, a half-mile away. The girls had played in the clearing many times during the day, but this was the first time they had seen it beneath the light of a full moon. The grass looked dewy and lush as the soft light fell upon each blade, but the trees that surrounded the meadow looked foreboding and ominous, as if their long, twisted boughs were ready to snatch the girls, if given the chance.


“What are we doing here again?” Maggie asked, as they made their way towards the center of the circle. “...And how long do we have to stay out?”


The adults moved to a point in the very center of the clearing and the girls positioned themselves a few dozen feet behind them.


Ruth Anne surveyed the area and sat, cross-legged, on the moist grass. “We are rooting out the evil spirits that are trying to infest Dark Root.” Her voice was as flat and informational as an encyclopedia entry.


She reached into the pocket of her dress and pulled out a key-chain flashlight and a comic book and started reading.


“How do we do that?” Maggie asked, watching as the elders––five women and two men––linked raised hands towards the sky.


They began singing, a soft melodic chant that Maggie had heard before.


Merry answered, “Every fall, the Council of Seven places a protective spell around our town. It must be done before the second half of the year begins, on November 1st. It keeps out the dark energies and ensures that the circle is strong.”


Maggie hopped on one foot, and then the other, trying to find warmth in the chill of the night. “But why do we have to do it now?” she moaned. “When it’s so cold?”


Ruth Anne responded, never lifting her eyes from her book. “It’s the witching hour. According to legend, the hours between twelve and three AM are when all things magical, including witches, are at their most powerful.” She turned the page of her book and cracked a smile at one of the drawings. “...It’s too bad we can’t keep out the crazy.”


Maggie widened her eyes. “But if witches are the most powerful now, won’t the bad things be more powerful too?”


“I’m scared,” Eve said, jumping in place as the elders continued their chant. Eve liked magick, but only the lighter arts, and those that yielded her a reward.


Merry took Eve’s hand and kissed it, and Maggie latched onto Merry’s other hand.


Merry wasn’t afraid of anything.


There was a long silence, followed by the heavy beat of a loud drum. Miss Sasha looked over her shoulder at her daughters, letting them know that it was almost their turn. They had been practicing the spell for weeks now, and Maggie hoped she wouldn’t forget the words.


Ruth Anne set down her comic book and the four girls clasped hands and waded towards the center of the circle.


Miss Sasha nodded and the girls began their incantation.


As the Witching Hour chimes


And the whole world sleeps and dreams


We join our hands in sisterhood


Staving back the darklings


The circle stands, its shape eternal


Though the darkness is still beckoning


Our light will ward back the infernal


And shield us from the doomsday reckoning


Maggie was still tired and stumbled on a few of the words, completely missing some of them; however, Merry spoke them as loud and clearly as she recited The Pledge of Allegiance at school. All the while, Eve played with her hair and hardly tried at all. For her part, Ruth Anne recited the words without emotion, anxious to get back to her comic book.


“Who wrote the spell?” Ruth Anne had asked their mother earlier that day while they were preparing. “It doesn’t sound right.”


“It doesn’t matter if it sounds right or not,” Miss Sasha had explained. “It’s the power of words––especially when spoken in numbers––that matters. When we stand together, no enemy would dare traverse the boundaries of Dark Root.”


Maggie caught a movement to her right. She thought she had seen a dark form take shape and then vanish. And then another. Were they coming or going? She couldn’t tell. 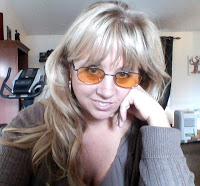 
April Aasheim spent her childhood traveling the Southwestern portion of the United States with her fortune- telling mother and her get-rich-quick dreaming stepfather. During that time, April and her family toured with a carnival company, sold bug repellant door to door, and resided in an abandoned miner’s shack in The Superstitious Mountains of Arizona.


When April became a teenager she went to live with her biological father in California. Her father saw April’s need to express herself and encouraged her to write her stories rather than tell them. By learning to write April was able to make sense of her family and the world she lived in. She continues to do that to this day.


April currently lives in Portland, Oregon with her husband. She is the mother of two incredible sons and the step-mother to a beautiful little girl. She is the author of numerious short stories, has contributed to several anthologies, and is the author of the well-received novel: The Universe is a Very Big Place.


The Witches of Dark Root is The first in the Daughters of Dark Root series and April looks forward to writing the second book in 2014.