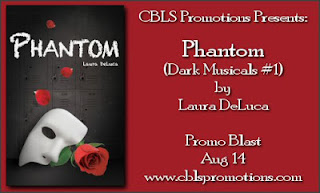 Description:
The “Phantom” was a musical phenomenon that Rebecca had always found enchanting. She had no idea that her life was about to mirror the play that was her obsession. When her high school drama club chooses “Phantom” as their annual production, Rebecca finds herself in the middle of an unlikely love triangle and the target of a sadistic stalker who uses the lines from the play as their calling card.

Rebecca lands the lead role of Christine, the opera diva, and like her character, she is torn between her two co-stars—Tom the surfer and basketball star who plays the lovable hero, and Justyn, the strangely appealing Goth who is more than realistic in the role of the tortured artist.

Almost immediately after casting, strange things start to happen both on and off the stage. Curtains fall. Mirrors are shattered. People are hurt in true phantom style. They all seem like accidents until Rebecca receives notes and phone calls that hint at something more sinister. Is Justyn bringing to life the twisted character of the phantom? Or in real life are the roles of the hero and the villain reversed? Rebecca doesn’t know who to trust, but she knows she’s running out of time as she gets closer and closer to opening night. Only when the mask is stripped away, will the twenty first century phantom finally be revealed. 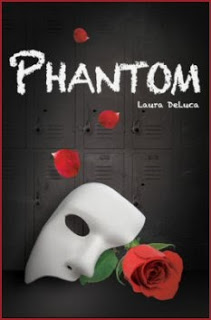 Excerpt:
The orchestra tuned for its virtuoso, and Justyn stood ready. But no one else was ready for the magical performance he began. Beside her, Carmen was rambling on about something mundane. Rebecca elbowed her to silence so she could listen to the perfectly thrilling tenor. As she listened to the song unfold, the world around her started to slip away. Gone was the high school auditorium. Gone were the rowdy teenagers. The Gothic stranger on the stage had become the embodiment of Erik, and Rebecca watched him in all his dark glory, belting out his tormented love through the words of his song. And she was as breathless with wonder as Christine herself must have been when the masked stranger serenaded her in the candlelit labyrinth of the opera house. In that moment, Justyn wasn’t just portraying the phantom. Justyn was the phantom.

“Let the music touch your soul.
Let the darkness make you whole.
Do not fear what is unknown.
Your true path has now been shown.
Listen to the words I sing.
Embrace the peace that night will bring.”

As he continued to sing in his deep but somehow angelic voice, Rebecca found that she couldn’t tear her eyes away from him. With every line, her heart began to beat faster.  She truly felt the arms of night wrapping her in a warm embrace. She could almost feel the hands of the phantom glide along her body as the words poured forth. The music caressed her. It possessed her—mind, body and soul. Each word left her longing, yearning for more.

She was gawking so obviously, it was hardly surprising when Justyn felt her eyes on him and steadily met her gaze. She realized her mouth was hanging open in stunned awe, and she quickly snapped it shut. His lips moved into just a small hint of a smile. He never took his eyes off her while he sang the final verse, making her cheeks flush to the point that she felt almost feverish. But it wasn’t embarrassment but excitement, arousal even, which was sending her mind spinning in so many directions.

When the song was over, and Rebecca had recovered just a hint of her composure, she couldn’t help but burst into a healthy round of applause. A few scattered people joined in, including Debbie and Carmen after she nudged them in the ribs. But only Miss King seemed to truly appreciate the brilliance of his talent as much as Rebecca did.

“That was amazing, Justyn!” the teacher gushed.

“Lord Justyn,” he corrected as he stepped down from the stage.

A few others complimented him as well, but he took in all in stride. In fact, his serious expression never faltered as he stepped down from the stage. He seemed almost bored, like it was all he could do to hold back a yawn, despite the smiles and words of encouragement.

But not everyone in the crowd was pleased as Justyn glided down the aisle, so ethereal in his dark garments that he still resonated the spirit of the Opera Ghost. Miss King might have been excited about the newest male addition to her cast after being limited for many years, but Tom and his group of boisterous companions glared at him as he passed them by.  Jay sneered and tossed a balled up piece of paper in Justyn’s direction, but the Goth was quick, and caught it in his hand without missing a beat.
“I think you dropped something,” he said.

His speaking voice was no less melodic than his singing voice, but something about his tone made Rebecca shiver. He tossed the paper back at Jay, who was nowhere near as coordinated as Justyn. He practically fell off his seat in his efforts to catch it.

“Hey vampire,” Tom called when Justyn went to walk away. “Are you sure you can handle the competition?”

Justyn smiled, a cool, sarcastic half-smile, and crossed his arms over his chest. “Are you?”

Miss King didn’t notice the short confrontation, and Justyn vanished from the auditorium as quickly and mysteriously as he had appeared. Only Rebecca had noticed the very real tension between the two boys. She wondered if it was a bad omen for them to start off the production with hard feelings and envy. That could only lead to trouble. The kind of trouble that could end with someone getting hurt.  The kind of trouble that Rebecca would do whatever it took to avoid. 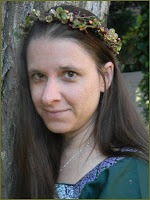 About the Author:
Laura "Luna" DeLuca lives at the beautiful Jersey shore with her husband and four children. She loves writing in the young adult genre because it keeps her young at heart. In addition to writing fiction, Laura is also the sole author of a popular review blog called New Age Mama. She is an active member of her local pagan community, and has been studying Wicca for close to eight years. Her current works include Destiny, Destiny Unveiled, Phantom, Morrigan, Player, and Demon.