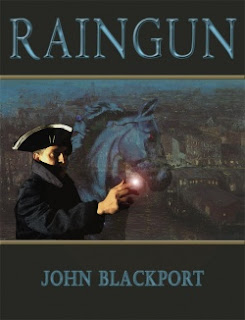 Rick Rivoire is flush with money, women, and prospects. He protects his country as one of the Rainguns, an elite regiment of spellcasting cavalry.

But the national policy drifts further and further into slavery and religious persecution, sparking rebellion. Joining the rebels could land Rick on a prison ship, in slave-irons --- or atop the same gallows where he watched his father hang.

The alternative looks no brighter. The status quo imperils Rick’s hard-won self-respect. Supporting tyranny would doom his dream to emulate the valiant swordswoman who braved a den of monsters to rescue the lonely, terrified nine-year-old boy he once was.

Rick can’t stay above the fray forever. He must either defend an aristocracy whose actions disgust him --- or risk everything he has.

This is the first book of The Talan Revolt. It is intended for adults only.

Raingun by John Blackport is a story about a man who does all he can to do the right thing, but soon realizes that  most of the time wanting to do the right thing is not as easy as we think. It comes to the point where he must make a decision. It is not going to be an easy one. I enjoyed this book and the storyline.  The only thing I had a little trouble following was some of the words used in the book. There is however a  glossary in the back.  I give this book a 5/5. I received one or more of the products mentioned above for free using Tomoson.com. Regardless, I only recommend products or services I use personally and believe will be good for my readers.
Posted by 3 Partners in Shopping at 10:44 PM