In the Shadow of Evil by Nancy C. Weeks 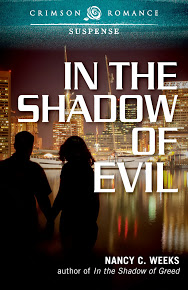 Young teacher, Jennie McKenzie must find the courage to take down the man who not only murdered her parents, but has made her his obsession. Josef Mendoza's personal vendetta against the McKenzie family rests on Jennie' shoulders. As she cradles the body of her ten-year old student gunned down on the streets of Fells Point, Baltimore, she knows Mendoza has returned, and has taken the life of another person she loves. He will have left no trace of himself, and Quinton's senseless death will be ruled as a gang related shooting. It's a message, Jennie belongs only to him. She must stop Mendoza before he harms anyone else. The only weapon in Jennie's arsenal strong enough to combat this evil is detective Jared McNeil, the one man she vowed to protect at all cost. Together, they can do anything; alone they will fail.
Posted by 3 Partners in Shopping at 11:43 AM