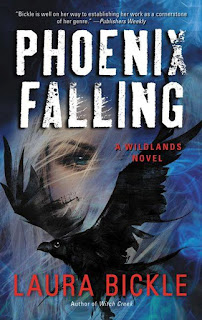 Laura Bickle, the critically acclaimed author of Nine of Stars and Witch Creek, returns with a fiery new chapter in her celebrated Wildlands series.

In the Yellowstone backcountry, a merciless source of evil carries a torch for the past…

Petra Dee and her immortal husband, Gabe, have been trying to gain a toehold in what passes for ordinary life in Temperance, Wyoming—

a wickedly enchanted land founded generations ago by the alchemist, Lascaris. Petra may be adept when it comes to the uncanny, but as a reasoned geologist, Petra still can’t fathom the wildfires suddenly engulfing Yellowstone National Park, or why Gabe claims to have seen the sky explode in flames. The answers could lie in the past.

It was a dreadful night in 1862 when Lascaris went harvesting for souls, only to be set upon by townsfolk determined to eliminate the root of all evil in a trial by fire. Petra can’t help fearing that Lascaris has crawled out of the ashes of history to wreak vengeance—and to complete his mission by claiming every vulnerable soul in Temperance.

With the help of Gabe and her coyote sidekick, Sig, Petra must now venture into Lascaris’s shadow before he turns her world into an inferno burning out of control.

“Bickle is well on her way to establishing her work as a cornerstone of her genre.”
—Publishers Weekly

For the first time in centuries, he stood frozen in shock.
A black shape as big as a car splashed out of the maw of the underworld. It bellowed a roar that rattled Gabe’s teeth and shook sparks in the air, plunging into the field toward the phoenix. It took him a moment to register that the interloper was a toad, black and roiling like thunder.
And the toad was not alone. Dozens of white shapes stampeded from the river behind it. They were pale as bone with oozing black eyes, crested spines undulating in the half-light and hooves pounded like war drums in the half-light. The bones were partially covered in skins that resembled rotting leaves, the legs spattered in black ichor to the knee. Horns were lowered to the grass as they charged, jaws open in rictus grins. They were buffalo, Gabe realized. Or what remained of buffalo, reformed and reanimated in some deadly familiar alchemical process.
Whatever they were, they were heading right for him.
Gabe swore. He had to get out of the way or be trampled. He pocketed the mirror and ran as fast as he could through the burning grasses, perpendicular to their approach. He’d almost succeeded in getting clear of them when a buffalo clipped him and he bounced, hard, into a ditch.  He dragged himself, gasping, to his feet, to find a wretched stench washing over him and a black eye staring at him—the eye of the black toad. The toad smelled of putrified meat in a forgotten slaughterhouse in the summer, and its loose skin sloughed audibly as it moved.
“What are you?” Gabe asked, though he was afraid to know.
“I am death,” the toad reassured him. It flicked its tongue out at him, and the black slime slipped down Gabe’s face. The toad burbled in laughter. “And you. You will belong to me when the phoenix is defeated. You will be one of my footsoldiers when this is through, when death rules this land.”
Gabe’s eyes narrowed. He had seen great evil before, many times. But this thing was beyond a facile explanation of evil. It was a living personification of the fermentation process, the spirit of rot and dismantling living things to their core. The phoenix might burn everything it touched with the purity of fire, but the toad would rule it in slow decomposition. Gabe’s fingers slid to his pocket, to the mirror.
The toad turned away, plunging after the buffalo. The phoenix descended from the sky, lighting in the field with a contentious shriek. Buffalo raced toward it. Like a toreador, the bird flicked its wings toward them, blackening bones that charged it, sizzling ichor, until the buffalo paled to ash and disintegrated. But there was a herd, and they kept coming. The reanimated buffalo made no sound as they assaulted the fire, splintering and stampeding toward the bird that flitted just out of reach, taunting them with the veil of its wings.
Gabe pulled out the mirror. Now that the embodiment of death was on the field, he should plunge in now, while the bird was distracted, and the glitter of the mirror might catch its eye.
The phoenix drew itself into the air with two powerful beats of its wings, out of reach of buffalo horns. But that didn’t deter the toad. It leapt up into the air and clamped its jaws down on the phoenix’s burning tailfeathers, dragging it back down to earth and the hooves of the buffalo. The toad and the phoenix fizzled sharply as they wrestled, and the air shimmered with the smell of burnt rubber.
Now was his chance. Gabe had taken two steps toward the fray when he heard a plaintive coyote howl, back from the direction of the tree and wrecked vehicles. The howl was full of eerie sorrow, as if it petitioned the heavens for mercy.
Sig. And Petra.
Heart hammering in his chest, Gabe turned and ran toward the howl.

Laura Bickle grew up in rural Ohio, reading entirely too many comic books out loud to her favorite Wonder Woman doll. After graduating with an MA in Sociology – Criminology from Ohio State University and an MLIS in Library Science from the University of Wisconsin-Milwaukee, she patrolled the stacks at the public library and worked with data systems in criminal justice. She now dreams up stories about the monsters under the stairs, also writing contemporary fantasy novels under the name Alayna Williams.

Her work has been included in the ALA’s Amelia Bloomer Project 2013 reading list and the State Library of Ohio’s Choose to Read Ohio reading list for 2015-2016. 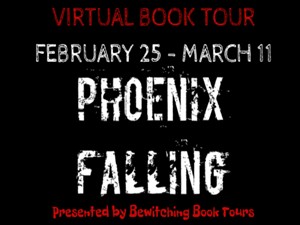