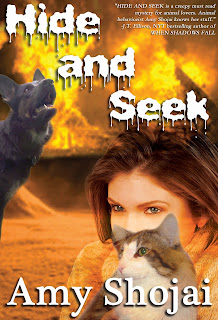 A mysterious contagion will shatter countless lives unless a service dog and his trainer find a missing cat . . . in 24 hours.
A STALKER hides in plain sight.
A VICTIM faces her worst fear.
AND A DOG seeks the missing—and finds hope.
Eight years ago, animal behaviorist September Day escaped a sadistic captor who left her ashamed, terrified, and struggling with PTSD. She trusts no one—except her cat Macy and service dog Shadow.
Shadow also struggles with trust. A German Shepherd autism service dog who rescued his child partner only to lose his-boy forever, Shadow’s crippling fear of abandonment shakes his faith in humans.
They are each others’ only chance to survive the stalker’s vicious payback, but have only 24 hours to uncover the truth about Macy’s mysterious illness or pay the deadly consequences. When September learns to trust again, and a good-dog takes a chance on love, together they find hope in the midst of despair–and discover what family really means. 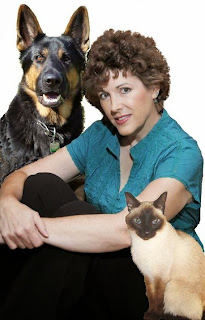 Amy Shojai is a certified animal behavior consultant, and the award winning author of 26 bestselling pet books that cover furry babies to old fogies, first aid to natural healing, and behavior/training to Chicken Soupicity. She is the Puppies Expert at puppies.About.com, the cat behavior expert at cats.About.com, and has been featured as an expert in hundreds of print venues including The New York Times, Reader’s Digest, and Family Circle, as well as national radio and television networks such as CNN, Animal Planet’s DOGS 101 and CATS 101. Amy brings her unique pet-centric viewpoint to public appearances. She is also the author of the critically acclaimed dog viewpoint thriller LOST AND FOUND.

My review; I really love animals and I loved the characters in this book especially the dog Shadow. It has also been something that amazed me when I saw and read about what animals can really do. This book is a fast moving continuous suspense story. No one could really understand why September has a stalker that would not stop. This book is the one for you if you love suspense and mystery and like to be frightened .  I give this book a 4/5. I was given this book by Partners in Crime Tours and all opinions are my own.