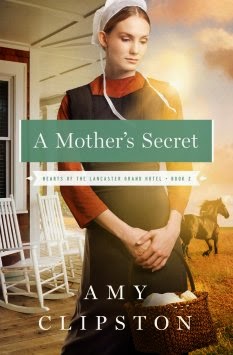 By Amy Clipston
Published by Zondervan

Carolyn Lapp dreams of marrying for love. But will the errors of her past destroy this dream forever? Carolyn Lapp longs to have a traditional Amish family. But she lives on her brother’s farm with her parents and her 15-year old son, Benjamin. Carolyn has never revealed the identity of Benjamin’s father and lives daily with the guilt and shame of her youthful indiscretion. Her brother simply will not forgive her. His answer is to arrange a practical marriage for Carolyn to Saul, a widower with a little girl. But Carolyn isn’t convinced that Saul really loves her and believes he is simply looking for someone to help raise his daughter. When Benjamin causes trouble at a local horse auction, horse breeder Joshua Glick decides that he must be taught a lesson. Carolyn and Joshua are unmistakably drawn to each other, but Joshua mistakenly assumes that Benjamin is Carolyn’s brother. Carolyn fears that if he discovers the truth, her past will destroy their budding romance. After years of shame and loneliness, Carolyn suddenly has two men vying for her attention. But which of them will give her the family - and the unconditional love - she’s longed for?

My review;
Carolyn Lapp has done what she has had to do and keep a secret for a long time. When she is faced with a life changing decision she is unable to do it. How long does someone have to be punished for something they did many years ago?  A lot of those around her are judging her unjustly. She is a very strong woman and not afraid to stand up for herself, sometimes. It is horrible that others suffer when it was not their fault. This is a story of forgiveness family and love. I give this book a 4/5. I was given this book by Booklook Publishing  and all opinions are my own.