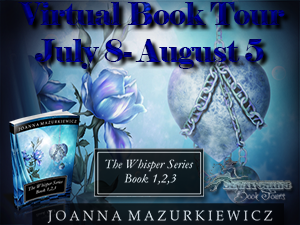 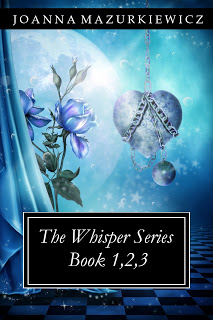 Book 1 The Whispers of the Sprite

When Ania moves from London to Swansea city in Wales she is hoping that her life will get a bit more exciting, after all she is running away from her controlling mother to taste more freedom and feel more independent. Everything seems to be going the way she wanted until she almost dies while taking a quiet walk around the beach in the late evening.

When she opens her eyes, nothing seems the same...

She starts seeing people that no one else is able to notice. An enchanting looking man keeps following her and Ania’s life seems to getting more exciting than she ever wished for.

After the attack something changes inside her, she has been blessed with the new frightening gift of seeing and hearing sprites all around her... the magical creatures that only existed in folklore, myths and legends of Britain.

Gabriel is attractive and handsome but no ... he is not a vampire. He keeps coming back and Ania feels an instant connection between them but this might get her into more trouble. Supernatural romance is not on her mind right now.

Because he is forbidden to even touch her ... the line between the death and love has never been so thin and the sprites won’t stop whispering until ... she will choose to love or abandon Gabriel


This year Ania is hoping to snap out of her depressed mood. She spends her summer locked up in her room, thinking about Gabriel who is somewhere between life and death.

So when Adam, Gabriel’s best friend, turns up on her doorstep and tells her that he can take her to him, Ania refuses because she can’t go through the same hell again. Her heart has already been ripped out of her chest.

She returns to Swansea to start another year at University, but her education is not the most important thing – she ends up getting more involved in the new and dangerous world of the Sprites. This year doesn’t seem to be any easier than the last one, and on top of everything else, she has to find the cure for the Iron curse before Gabriel’s life will end forever.

All at once, Ania is juggling her University work, investigating the kidnapping of a young girl from America for the University paper and trying to fight with the attraction to a handsome blond-haired Sprite who has appeared in her life so unexpectedly.

Niamh was kept in the darkness, not knowing what creature has captured her. Then her life spins out of further control as she discovers her family from California have been lying to her all this time – she’s adopted.

Niamh returns to California, shocked and traumatised. She cannot forget that she is adopted. And then, out of nowhere, a stranger visits her to tell her she isn’t human.

Niamh cannot take any more surprises, so she decides to go back to her place of birth – Wales. She needs her questions answered. Her life transforms further as she finds that Sprites have existed throughout centuries and she is not the only one who can see them.

So why is she connected to Ania, the scrawny Russian girl who rescued her from the dark cave?

To confuse Ania even more, she is finding well-known fairy tales in her pocket. They don’t seem to make any sense until she makes a decision to follow her emotions and start looking for her real family.

Will she ever get to the end of this emotional rollercoaster?


I shiver when the wind starts howling and look around, hoping to spot any living soul near me, but I am alone. I take another shortcut and then feel horribly lost. The silence seems different and I cannot understand why there are no cars around. I stop for a moment to wrap myself in a light cardigan that I find in my rucksack. Only a few seconds pass, but during this short period of time I feel like I am being watched. My subconscious is laughing out loud. I look around but the streets are uninhabited and silent. No one is around but my mind is playing tricks on me. I inhale the thick air filled with my own fear and a cold shiver flows down my spine. A harsh, bitter wind starts to blow again and simultaneously a few streetlights go out, enveloping the street in an unexpected dimness. The tar-black darkness that surrounds me obscures my senses; I can't see anything and my eyes focus, trying to get used to the gloom.


I stop abruptly and for a moment hear only my shallow breaths, then I hear someone’s movements and my heart starts racing while my mouth gets unpleasantly dry. I stop breathing, trying to pinpoint the noise, but everything is still again. The silence buzzes in my ears. My heartbeat quickens, making my mind spin. Suddenly, one of the streetlights comes back on again. I blink rapidly and continue walking while looking around at the unfamiliar surroundings. The houses and streets seem to be under a spell. There is not a human being anywhere around me.


I continue walking, but I don’t hear any more odd movements. Soon I locate a familiar path and reach my street within minutes. I begin to wonder if I actually heard anything and my rational side keeps telling me that it's only my imagination. I approach the house, wondering if my mother will be waiting at the window for me, but all the lights are off.


I exhale, still feeling slightly apprehensive, staring at the round of semi-detached houses in the cul-de-sac. I stop and put my rucksack on the floor to find the keys, and then I hear that movement again and lift my head. The dark figure is walking towards me slowly. This time I am fully aware that it’s not my imagination.


‘Peaceful night?’ says the stranger walking by when I finally have a key in my hand. I smile weakly, dismissing her statement.


In the light from the street I glance at the stranger one more time. The strong fragrance of her perfume reaches my nose and I inhale, recognising lavender. I manage to get a look at her face. She is an older lady with short, silver hair and big, wide, dark eyes, but it's too dark to tell if I have seen her before. As she starts to disappear into the dark alley, the rain starts drizzling. For a moment I wonder what she is doing here. I toy with the idea of her visiting anyone I know. I shake my head, thinking it’s been a rather strange night.


My thoughts are still on the odd noise that I thought I heard in the alleyway. While walking upstairs to my bedroom, I look in to make sure that Mum is still asleep and I quietly close the door. Normally she would wait for me to tell me off. It’s not like her; she always makes sure that I am at home at a reasonable time. I take off my clothes and soon drift off into a dream, forgetting about the woman on the street.


Joanna Mazurkiewicz was born in Poland. She moved to United Kingdom when she was only nineteen and just finished high school. She had aspired to be a writer upon completion of the Harry Potter series but also enjoyed reading books like 'Gone with the Wind', 'Animal Farm' and 'The doll'. She graduated from Swansea University with a bachelor degree in American Studies. While studying in the UK she made a decision to start writing fiction in English.


The "Whispers of the Sprite" is her first debut novel and she is currently working on the second book in the series. Joanna lives in Cowbridge, a small town in South Wales near Cardiff with her boyfriend Bruce. She enjoys cycling around Welsh countryside some of which has become the settings in her first series.


http://www.goodreads.com/author/show/6543523.Joanna_Mazurkiewicz
Posted by 3 Partners in Shopping at 10:21 PM