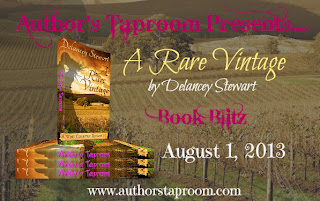 Isabella DaSilva, a fiery grad student from Cornell's wine program is eager to leave her past behind her and forge a future in the vineyards of the West as an apprentice at Chateau Sauvage, a winery seeking to produce wine like no other California wineries had so far -- Rhone varietals.
She arrives at Chateau Sauvage to find that wine might not be her only interest. The winemaker, Jonathan Sauvage, is tall, dark, and handsome, and clearly in need of help. Together, they work to make a pioneering wine in an effort to keep the struggling winery afloat. Each struggles with their demons -- hers in the form of a painful and mysterious past; his created by memories of what once might have been. In the process, they find that the pain of their shattered pasts fit together perfectly, making their union as perfect as the wine it produces.
A Rare Vintage features an intense and commanding hero who isn’t afraid to ask for help, and a woman who knows that while she might technically be the apprentice, she has plenty to teach Jonathan Sauvage.
This book is the first in the Wine Country Romance series. 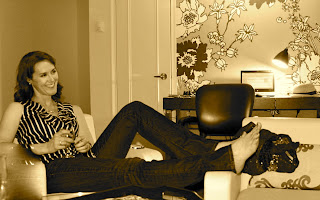 Bio:
Delancey Stewart has lived on both coasts, in big cities and small towns. She's been a pharmaceutical rep, a personal trainer and a wine seller. Despite lots of other interests, she has always been a writer in some way shape or form.
A military spouse and the mother of two small boys, her current job titles include pirate captain, monster hunter, Lego assembler and story reader. She tackles all these efforts at her current home in Southern Maryland.
Delancey Stewart is the author of Through a Dusty Window: New York City Stories 1910-2001 and A Rare Vintage, the first in her Wine Country Romance Series.
She is also working on the Girlfriends of Gotham Series for Swoon Romance. The first book, Men and Martinis, will be released in Fall 2013. 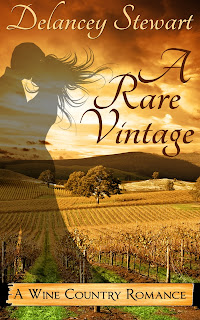 At dinner, Jonathan could feel Isabella's eyes on him as he spooned stew into his mouth. His sister's cooking was the one thing he had to look forward to each day, but he was too distracted to enjoy it; plagued by the lingering questions that had been hanging in the kitchen when he entered. He knew that Vicki was worried about him, but he was surprised that she'd divulge so much to a perfect stranger her first night at their dinner table.
"So you told our guest all about Charlotte, I guess?" Jonathan said, gazing into his bowl.
Isabella gave him a direct look then.
"Nope, I didn't even mention her." Vicki said, pulling the salad toward her plate. "But now it seems you have to."
"No," Isabella interjected. "I mean," she looked up at Jonathan, her pale skin flushed. "I don't want to intrude. I'm not really a guest, or a visitor…I'm here to work. I'm touched that you'd include me in your family meal like this, but I didn’t expect it. I certainly don’t expect anything more."
"Don't be silly, Isabella," Vicki said.
"No, really. I'm not used to anything more," Isabella said.
Jonathan let himself look up at her then. Something about the way she said that, staring into her bowl, made her seem so vulnerable. What was beneath the smooth porcelain surface? It seemed that this astute wine student—so confident when telling him how to manage his vineyard—might have secrets of her own.
"Charlotte used to live here with Jonathan," Vicki said. "And now she's gone, that's all."
Jonathan shot a fierce look at his sister, who returned the look with defiant bright eyes.
"Charlotte was my fiancé," Jonathan said. "We had a…a disagreement." He finished. He stalled, playing Charlotte's departure over in his mind for the millionth time. His heart tore all over again as he recalled her sharing the news that he had thought would be a perfect beginning for them. She hadn't agreed. To her, the beginning of life stirring within her was no more welcome than the new life he'd wanted to build between them. Jonathan clenched his fists as he watched her leave all over again, vowing to end what they had begun. He hated how powerless the memory made him feel, how helpless he'd been to stop her from ending everything.
"I see," was all Isabella said.
He looked up to find her watching him with those hazel eyes. There was a depth there that he didn't want to see, but couldn't help to be drawn to. Something about her gaze made him want to get nearer to her, ask her to wrap those long thin pale arms around him. He held her gaze a moment too long, his nerves firing almost as if she were touching him. He flushed and looked down the table at his sister.
She was watching them; her spoon paused in front of her mouth and a faint smile on her lips.


He shot her a dark look to let her know that he didn't appreciate being exposed to a stranger.

There is a tour-wide giveaway of an ebook copy of A RARE VINTAGE by Delancey Stewart.  Please include the Rafflecopter code with your post
a Rafflecopter giveaway
Posted by vicjbr at 10:01 PM