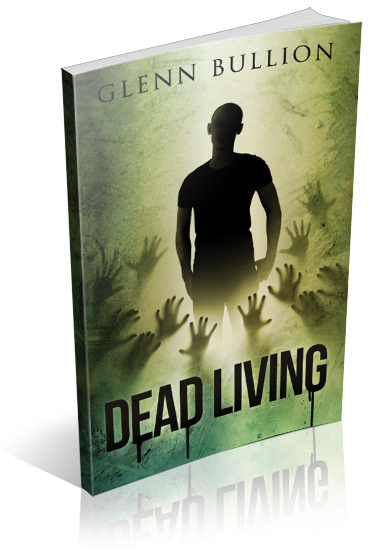 Born on the day everything ended, a world filled with the walking dead is the only one that Aaron knows. Kept in seclusion, his family teaches him the basics. How to read and write. How to survive.

Then Aaron makes a shocking discovery. The undead, who desire nothing but flesh, ignore him. It’s as if he’s invisible to them.

I live in Maryland with my wonderful wife and four cats. I love gaming, computer technology, movies, and of course, reading and writing. I love science fiction and especially horror and the paranormal. Ghosts, vampires, werewolves, zombies, anything supernatural, all beautiful subjects.

I’ve been writing since I was twelve years old. There’s just something about creating a story that I like. I always try come up with something that hasn’t been done, or is unique in some way. It could be someone with demonic powers, or something much more simple, such as a person that zombies ignore. It’s fun to create a character, give him or her a personality and background, and watch them evolve through a story.

I’ve tried other subjects, but always drift back to horror and paranormal. There’s a reason why we keep going back to horror movies and books, why they’ve made fifty Friday the 13th movies. People like to be scared, but more than that, I think paranormal and horror stir the imagination like nothing else. We’re all just a little nervous to open that closet door at midnight, or look under the bed.


The first book I ever actually completed (plenty of unfinished WIPs floating around) was a novel called Demonspawn. I didn’t realize it at the time, but Demonspawn was the start of a consistent world I’ve revisited every so often, full of the supernatural. Essentially, it was the start of a series.

Demonspawn tells the story of Alex, an average twenty-something who finds out he has demonic powers. He must learn to accept his powers, as well as himself, as his world suddenly gets turned upside down. Vampires, ghosts, demons, quite a fun mix.

2. Have you always liked horror movies?   Did they scare you when you were younger/


Oh yeah, I’ve always loved horror movies. I even love the badly filmed, "eye roll" type movies. I think the horror genre has the most amount of imagination put into it. That probably sounds weird, considering horror movies are also famous for their formula. But there are so many ways to scare someone. I love the fact that a well-made horror movie can terrify someone by not showing something.

What child growing up wasn’t terrified by Freddy Krueger? And The Exorcist still brings chills.


The idea for Dead Living came from a simple question. What could I do different in a zombie novel? It seems a lot of zombie tales are similar. I’ve been told by readers that many seem to be simply survival manuals disguised as a story. I wanted to try to create an entertaining tale that was different and stood on its own.

My main characters are always odd in some way, whether they’re supernatural, or magical, etc. So I wanted a main character who was unusual in a zombie apocalypse. And I thought "Why not have him be normal in a dead world?" The zombies would "accept" him, not try to hurt him. As plain as this sounds, I thought the concept could go in a lot of different directions. This simple fact would completely change his outlook on the world. It would make him a little more reckless, give him hope where other people would have none.


I’ve actually played with that idea, following a different camp somewhere in my zombie world. I’ve also had a few ideas of revisiting the main characters from the first novel. I do want to write a sequel, but I honestly don’t know where to go with it yet.


I have written other works besides horror, but every single one of them has had some sort of paranormal lean. It could be monsters, ghosts, demons, or something much more subtle, like a man who can project his mind. I think I’ll always stay in that area, the other-worldly, supernatural area. You’ll never catch me trying to write a romantic comedy.  Just to give an idea:

A Witch To Live – witches and vampires

Jack Kursed – a human cursed by a witch, and more vampires

Thank you very much for answering my questions.  Debra
Thank you much for letting me answer them.  Always fun to reflect on the words you’ve written.
My review,  Wow!  What a cool thought. What would you do if everyone around you was undead or one of a few survivors and you are the only person who is not affected by the undead?  It made me really stop and ask myself that very question. The author, Glenn Bullion has put a really different twist on a horror book of this type.  I give this book a 5/5. I really loved it!   I was given this book by Expresso Book Tours for the purpose of a review. All opinions are 100% my own.
Posted by 3 Partners in Shopping at 2:15 AM