Set in a time of uneasy peace and opportunistic alliances in ancient China, The Spring and Autumn Murders tell the story of three friends, Hai, Lei and Zian. With a friendship forged in military training and battle, they are sent from their home kingdom of Zhou to a village in the northern area of Jin to help patrol the border against barbarians from the surrounding mountains under the direction of Lord Nianzu, the local magistrate. It appears to be a normal assignment, but the three friends soon discover that nothing about this new detail is routine.


While Hai and Lei make their first nightly patrols in the area, Zian is surprised in camp by a panic stricken, bloody Hua, fiancé of their employer’s son. Zian sets out to find his comrades, and returns with them, only to find Hua missing, and mercenary soldiers riding into their camp intent on finding the murderers who have terrorized the village below, killing to only son of Lord Nianzu.


Now it’s a race to find Hua and the truth between the three friends, the military that is chasing them, the grief stricken Lord Nianzu, and the real killer, who each have their own motives for finding the girl. The trails lead each group through quite a number of surprises, uneasy alliances, the ever present spirit world, and more bloodshed to find the truth that sometimes even the most quiet of villages hide the darkest secret imaginable.

Excerpt
Zian opened his eyes and felt the coarseness of the tree beneath his back.  He had spent many hours, hell days trying to master that technique.  It did not come naturally to him.  No real fighting style did, really.  Most of the time he was more prone to simply attack wildly like a wolverine or badger.
Snap
Zian stopped moving for a moment.  There was something off to his right, something made some noise.  Zian shook his head.
“Probably just some animal,” he grumbled as he sat down to feed the fire that he had made.
Snap. Crack.
Zian frowned.  No forest animal would be making this much noise.  He placed his hand on the handle of the jian, and slowly drew it from its scabbard.  With a practiced step he moved toward the source of the sound.
Thump!
Something soft hit Zian in the side.  It felt sticky and wet, much like the inside of the dumplings that Lei’s mother had made all those years ago.  Zian looked down to see two small arms wrapped tightly around his waist.  They looked different somehow, even in the light of the moon and stars; they looked somehow darker than they should be.  There was also that sticky sweet smell, almost metallic.
Zian raised his head carefully and sniffed again.  He knew that smell –  he had smelled it on enough battlefields.  It was blood.   He looked down once more and followed the arms wrapped around his waist to the trembling shoulders, small and frail, up the neck to the face buried and sobbing in his side.   He jerked the young girl away from him, the scent of blood still fresh in his nostrils.  She squealed as he ripped her arms from around him.  Zian looked down in shock to find the panicked face of Hua staring up at him.
“Be quiet!” he hissed, taking her by the shoulders and shaking her roughly. She cried out once more, and Zian pulled her fiercely into him to muffle the sound.  At first she struggled, clawing instinctively at his back, but then Zian felt her shudder, and finally relax her shoulders, her fear and exhaustion over-riding her will to fight.  He felt her pulse slow.
“There, now sit down,” he ordered, pushing her gently down to the ground.  His eyes searched her body and face for any injuries, and marveled at the amount of blood that was on her clothes.  The blood covered her arms, her chest and splattered onto her face.  Zian tore her robe and looked closely for the knife wounds that he was certain that existed.  He found the skin pale and trembling, but unmarked.  Her eyes flashed a fearful, vacant look in the passing moonlight.  Zian swallowed quickly and with unsteady fingers tried to return her robe to the original condition.  Once Hua was properly covered, Zian leaned back and moved away.  He shook his head, angry with himself for being such a fool.  Tearing off the clothes of a woman, one who was engaged to Lord Nianzu’s son.  Even Hai would have an issue with this. 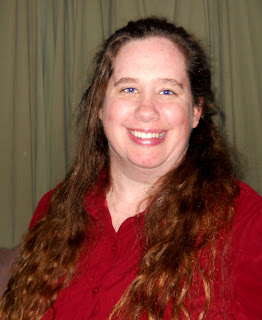 Author Info
Laura Seeber has worked as a geologist, an environmental consultant, and a freelance writer.  She currently divides her time between her own environmental consulting business, handling various ghostwriting and freelance writing projects, and her own fiction writing.  Her interests include history, outdoor activities, martial arts, mysteries, and non-fiction material.  The Spring and Autumn Murders is her first novel.   She currently lives in Illinois with her husband, Michael.

Author Links
www.writersthead.com
www.facebook.com/lseeberstoryteller
www.goodreads.com/author/show/6869199.Laura_Seeber
https://plus.google.com/111689485731265720855/posts
My review, I love to read a different kind of mystery. In this book I learned a lot about parts of Chinese history that I knew nothing  about. This author has the way of telling a story that is a mystery and yet you seem to get to understand the characters and their culture of the time. I was really engrossed in this story from the first page. I give this book a 5/5. I was given this book for the purpose of a review and all opinions are 100% my own.