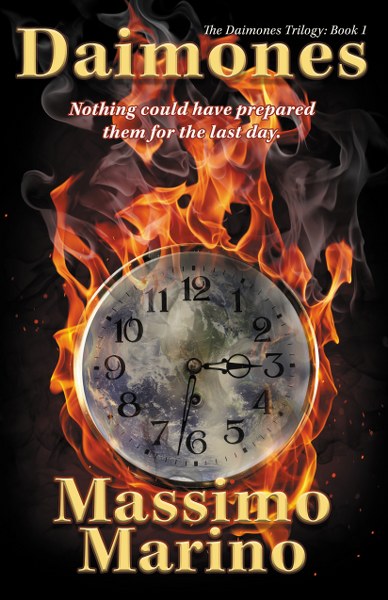 Get your Science Fiction from a CERN Scientist ! Over 1,000 ratings on combined goodreads and Amazon.

Murder, genocide, the Apocalypse.
Explore the future of humanity in Massimo Marino's sci-fi debut, Daimones, an apocalyptic tale that feels like it could happen tomorrow. You may never sleep through a windstorm again.

Nothing could have prepared them for the last day. Death swept away the lives of billions, but spared Dan Amenta and his family, leading them to an uncertain future. When merely surviving isn't enough and the hunt for answers begins, memories from the past and troubling encounters lead Dan to the truth about the extermination of the human race. Distressing revelations will give new meaning to their very existence.

Early humans shaped the future and seeded a plan millions of years in the making. Now survivors must choose: Endure a future with no past or fade away into a past with no future? 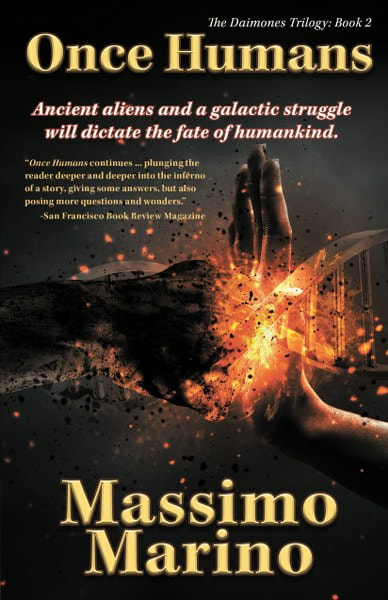 Once Humans
The Daimones Trilogy, Volume 2

The rebirth of the race of man is closely watched, and the Selected, the transgenic humans created by the Moîrai, guide and care for the wellbeing of the remaining humans in their various Communities around the planet.

Peace and security are suddenly shattered with acts of sabotage disrupting the fragile equilibrium of the growing society. Betrayal, fear, and a cosmic conspiracy risk sending the planet to the brink of self-destruction. Will Dan Amenta be able to come to terms with the logic of alien minds? Who is behind the sabotage and why?

Death and blind violence walk in the secret alleys and in the depths of the planet, from the coldest lands to the bottom of the oceans; someone is at work with an evil agenda dictated by greed and lust for power. Ancient aliens, a galactic struggle, the control of a unique resource, meld to dictate the fate of humankind. 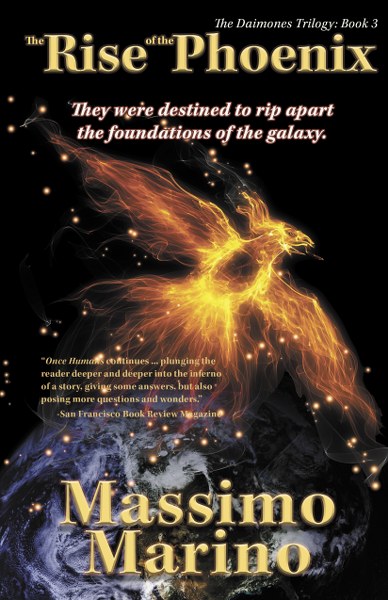 The Rise of the Phoenix
The Daimones Trilogy, Volume 3

War is inevitable, and the human race sets out to finally deliver retribution.


An alien colonization has altered the destiny of the human race forever. After wiping out billions of people, the race known as the Moîrai created a new, transgenic species of humans called the Selected -- giving them both the gift and burden of longevity and memories of human history on another world.

The aliens charged the Selected with the responsibility of caring for "the spared ones," unaltered humans who survived the global catastrophe. That includes Dan Amenta's daughter Hope, the only spared one who remains.
Together, Dan and Hope have witnessed Earth transform into a different world, where a powerful new neurological drug sparks the rapid evolution of the Selected, but Hope is nearing death. Once she's gone, obligations die with her, and the path is clear for a chain of events destined to rip apart the foundations of the galaxy. 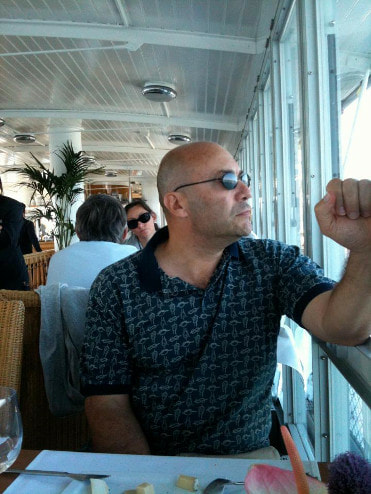 Booktrope Publishing LCC has published Massimo Marino's works up to June 2016 when Booktrope closed its business. Massimo is member of SFWA (Science Fiction and Fantasy Writers of America), and a scientist envisioning science fiction.

He contributed to the experiments at CERN and The Lawrence Berkeley Lab, then accepted leading positions at Apple, Inc. and at the World Economic Forum. He is also co-founder of "Squares on Blue" -- a Big Data Analytics service company -- and of "BookGarage" -- a publishing services brokerage firm.

Massimo currently lives in France and crosses the border with Switzerland multiple times daily, although he's no smuggler. He went from smashing particles at the largest accelerators in the world, to smashing words on the most popular laptop in the world.