To Whatever End by Lindsey Frydman Cover Reveal 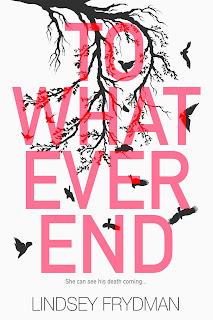 Quinn Easterly is cursed. With one touch, she can see the end to someone's life. Everyday deaths, and ones that haunt her in her daydreams. Ones that have always proven impossible to prevent. She has finally learned to go about life as usual until she meets Griffin.

With one touch, she sees a death she simply cannot ignore. Not this time. Not when, dying in her arms, he whispers three simple words that change everything.

Even if Quinn can’t change the future, can’t save him, she at least has to try. Even if it means taking the bullet meant for him. 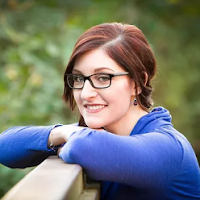 About the Author
Lindsey has been writing since she was nine years old, when she discovered the awesomeness that is Harriet the Spy. Her books always include a romance, though sometimes there’s an added sci-fi or magical realism twist. She lives in Columbus, Ohio (where the weather is never quite right). Her BFA in Photography and Graphic Design has granted her a wide assortment of creative knowledge that serves as inspiration (and not much else). When she’s not crafting YA and NA stories, you'll likely find her spending waaay too much time on Pinterest, playing a video game, singing show-tunes, or performing in a burlesque show—because she enjoys giving her introversion a worthy adversary. (Plus, it's the closest to Broadway she’ll ever get.) Lindsey was a proud 2016 Pitch Wars Mentee and thoroughly adores being a part of the wonderful writing community. THE HEARTBEAT HYPOTHESIS is her debut novel.