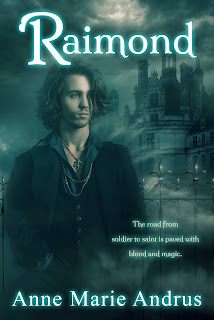 Tagline:  The road from soldier to saint is paved with blood and magic.

A lone soldier on night watch. A single bullet through the heart. Every light in Paris flickers—the city’s thundering silent scream.

When Commander Raimond Banitierre was assassinated, French Revolutionaries lost their gallant leader. After a villain’s offer of eternal life condemned him to slavery, Raimond rebelled again, driving his vampire comrades to freedom.

Raimond escapes to Savannah, Georgia where his dream of becoming a doctor comes true. During his trial-by-fire residency on the Civil War’s battlefields, he discovers his true calling—the power to preserve memories and dignity in the face of death. His chance meeting with a beguiling mortal nurse ignites passionate nights and a long overdue crack in the door to paradise.

Vicious flames and an unholy miscalculation deliver Raimond back to the depths of hell. Being arrested for treason makes him wish for death and the arrival of Prince Draven Norman appears to be the final nail in Raimond’s coffin.

Will the prince’s eccentric judgement grant Raimond a true reprieve? Is Draven’s invitation to join New Orleans mystical royalty an extension of his own treachery, or the next step in Raimond’s miraculous journey?

Has the legendary Crescent City found a spirit noble enough to protect her future?

In a derelict neighborhood on the fringe of Paris, one burning red eye glowed through the crumbling foundation of a formerly grand hotel. While family and friends still struggled to put the Revolution’s gory ugliness behind them, their every move was scrutinized by a trapped predator.
Raimond kept watch, as he had done for decades, until his eye smoldered from distant sunlight. Switch eyes. A smile drifted across his face while children scurried behind their parents, shopkeepers threw open their doors and the light of hope shone on every street except one. The worn and rutted surface of Rue Le Cross remained cloaked in darkness.
Footsteps echoed off the cobblestones outside Raimond’s portal and he strained to see the trespassers. He flinched at the sight of glowing torches, retreating again into his underground gloom.
A woman barked orders. “Tell those youngsters to stay behind the barricade.”
“Go to school, you little fools!” a man called out. “This is no place for kids…or anyone.”
“What are you so afraid of husband?”
Raimond stepped forward to hear the man’s answer. I should hope they’re scared.
“I’m not the only one who hears the awful noises in this passage after dark and it’s always night on this bloody street.”
“Can we just light these lamps and get out of here?” The woman’s eyes darted around. “The mayor paid both of us a fortune.”
Here they go again. The gas lanterns blazed to life and Raimond drummed his fingers on the wall.
“They’re burning,” the woman hissed. “But why are they flickering?”
The flames shivered and gasped, as if being blown out by invisible lips. Raimond shook his head.
“This alley is cursed. Every lock is broken. Nothing opens.” The man rattled handles and knobs. He froze at the shuttered hotel’s rusty door. “Do you hear that?”
Raimond rhythmically smashed a rock on the iron bars of his prison.
“We didn’t get paid enough for this wife.”
A menacing growl ricocheted off the walls and the couple dropped their torches, slammed into each other and scrambled toward the main street.
Don’t come back. Raimond let the rock slip from his grasp and slumped against the dusty wall. Those doors are jammed shut for a reason.
As the final, auburn embers of sunlight faded behind the craggy roofline, the underworld groaned to life. Raimond turned around to the absolute black of the catacombs and the squeal of rodents that drowned out hungry cries. He kicked a rat across the cell and his stomach twisted at the whimpers of miserable children sleeping in the cold. They were all victims of a monster that the mortal world above didn’t believe existed. He didn’t have the heart to tell the little ones they were vampires, too. He sighed. None of us will ever be warm again.
Raimond punched walls he’d been beating on for years. A few remaining slivers of stone broke free and he slid to the floor, clawing at his eyes.
Don’t fall apart now, soldier. This moment has been years in the making.
As an officer, he’d been expected to sacrifice his life.
Until a maniac stole my soul.
That crime was nothing compared to what the innocents who lived beneath the street with him had endured.
Tonight, it all changes.
In a flash Raimond slammed into iron bars that tore the skin from his forehead. He drew a breath of putrid air.
The villains beat me and I plotted.
He looked at the blackened skin of his hands.
They burned me, and I schemed.
His escape from the torture was a dive into the darkest corners of his mind, and each time he let himself dream, the hallucinations became bloodier and deadlier.
Never mind revenge; I want absolute victory.
His eyes wandered across the dungeon full of unwilling vampires, landing first on a fellow soldier.
Such an odd story, a Scot fighting alongside the French.
Two younger lads slept next to the burly man, both clinging to the ends of a tattered blanket. Nuns, farmers and even patients from the local infirmary had been ripped from their beds and turned into slaves by a madman. In the middle, a young nurse huddled with the frailest children. Her voice, touch and passion to heal had never faltered, despite the hellish conditions.
Posted by 3 Partners in Shopping at 9:52 PM